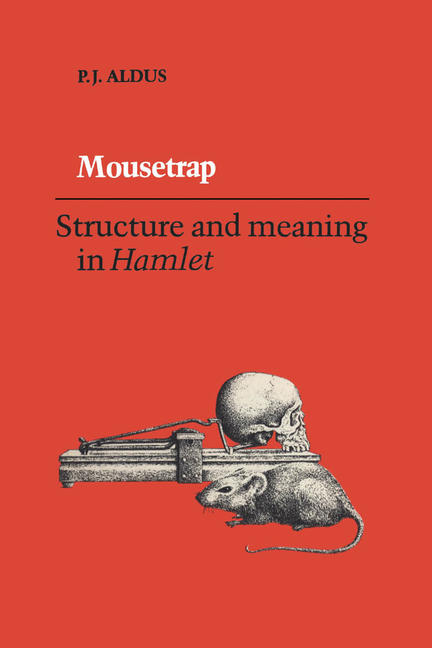 There is scarcely an element of Hamlet that has not received attention many times, yet both general reader and sophisticated critic would generally agree that the character of Hamlet and the full meanings of the play remain mysteries. No less a puzzle is the art of Hamlet, for, while the form of the art is elusive, the feeling of essential meaning is strong.

Professor Aldus hopes to enlarge our understanding of Hamlet and our appreciation of Shakespeare as a conscious artist of great subtlety by studying the play’s dramatic structure in the light of Aristotle’s Poetics and its meaning as literary myth in the light of Plato’s Phaedrus. This is a study of Hamlet as literary myth, a figurative mode of art in which structure is basic; yet primal myth, myth in the larger, non-literary sense, becomes part of it too, because the substance of Hamlet seems to be of this kind.

Professor Aldus’s reading of Hamlet is both radically new and decidedly provocative. A great deal of very careful inquiry has gone into the unearthing of connections which at first sight often seem improbable and tenuous, but which, one comes to find, have an illuminating total unity. Future commentators may not accept all that Professor Aldus has to say about, for example, Ophelia’s crown of flowers, but they will hardly be able to ignore it.

P.J. Aldus holds degrees from the University of Detroit, the University of Michigan, and the University of Chicago. He has taught in several colleges and universities in the United States and Canada. He now lives in Lower Waasis, New Brunswick, where he divides his time between restoring an old farmhouse and pursuing further critical inquiries.