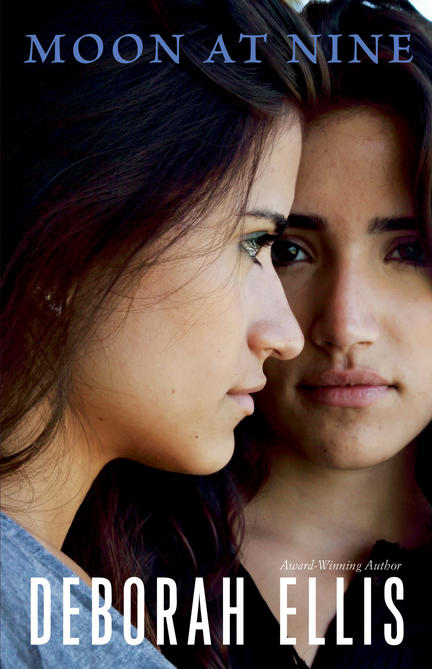 Based on interviews with a young woman forced to flee Iran because of her sexual orientation, Moon at Nine is a tense and riveting novel that shines a light on an issue of social injustice that continues to this day.

Fifteen-year-old Farrin has grown up with secrets: ten years after the overthrow of the Shah, her aristocratic mother is still working against Iran's conservative revolutionary government. But when Farrin befriends Sadira, the intriguing and outgoing new student at her school for gifted girls, her own new secret is even more dangerous. Because the girls discover their relationship is more than just a friendship—and in Iran, being gay is punishable by death.

Praise for Moon at Nine

STARRED REVIEW "Moon at Nine is a riveting tale of young girls being true to themselves and their love, set against a political and cultural backdrop few readers will have first-hand knowledge of. Ellis once again proves she is a master storyteller. Readers will remember Farrin and Sadira long after the final page has been read".—Quill & Quire Starred Review by Ken Setteringon, author of the Stonewall Honor Book Branded by the Pink Triangle

"Sparse and eloquently-written, this short historical novel is both beautiful and heartbreaking."—School Library Journal

"A firm grounding in Iranian history, along with the insight and empathy Ellis brings to the pain of those whose love is decreed to be immoral and unnatural, make this a smart, heartbreaking [novel.]"—Publishers Weekly

"In this riveting love story based on true events, Deborah Ellis transports readers to Iran in 1988 just nine years after the Islamic Revolution...Readers will find this powerful book both compelling and chilling."—Dragon Lode International Books

"As more and more states strike down anti-gay marriage laws, Moon at Nine is a chilling reminder of the suffering of too many others...its importance is hard to deny."—BookDragon, Smithsonian Asian Pacific American Center

"Deborah Ellis manages to avoid stepping on cultural taboos through rigorous research and editing, and her story hits on universal themes such as family secrets, friendships, relationships and coming-of-age...more than simply an LGTBQ novel or historical fiction...a multi-faceted hybrid that can be enjoyed by both teens and adults...It is powerfully grounded in the setting of Tehran, and depicts the beauty of falling in love and the cruelty and coldness of power in the hands of outside forces."—Ottawa Review of Books

"Basing her book on a true story, Ellis has written a heartbreaking tale of prejudice and injustice...Highly Recommended."—CM Magazine

"Moon at Nine is a tense and riveting YA novel."—The International Educator

Moon at Nine is based on real-life events. The book will help students understand homophobia, and the importance of human rights. When two teenage girls from Iran meet and form a deep friendship, they know that they are at danger of being arrested by the religious police and executed for being homosexual. The central themes of this powerful story are staying true to oneself, and finding hope in the face of impossible odds under a repressive regime.

Living in Canada, watching the news and having the internet, I've seen how females are treated in other countries. Iran is one of those countries, at least some years ago, I would have been afraid to have been a female there. The freedom I have being a woman here is entirely different. This book showed me that, even before the LGBT came into it. That made it a whole other can of worms.
I can't believe how bad people are treated in this book. Hung for the most ridiculous reasons. I just couldn't fathom having to live in that world. But I do, did and will, just not there.
This book is an emotional read. That's what gives it power. You feel everything that Sadira and Farrin go through. Almost too much.
Definitely give this one a read.

In this third person rendition, Deborah Ellis creates characters that aren't all loveable Ann of Green Gable types. Farrin is a defiant perhaps selfish teen with a razor sharp mind who hates her mom. Besides writing stories, she has no goals until she meets Sadira, a kind and smart girl who comes to the aid of all. A friendship flames up and turns into love. Then counter to every warning, the pair plot to be together. Having vexed the detested school prefix, Farrin attracts vengeance and the most severe consequence. Can she save herself? More importantly can she save Sadira? A story that illuminates, astounds and perhaps will grow empathy for other cultures and sexualities.