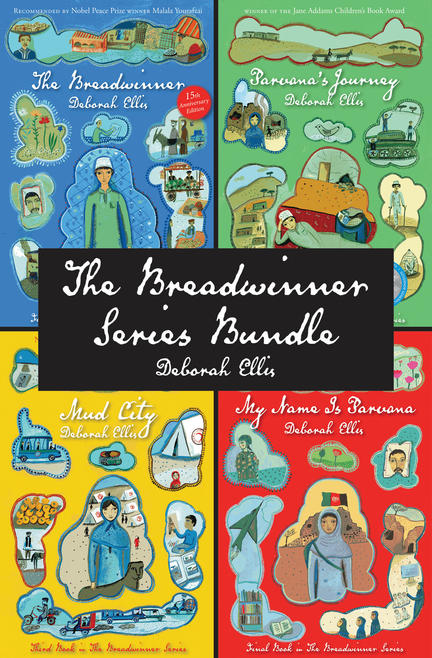 The first book in Deborah Ellis’s riveting Breadwinner series is an award-winning novel about loyalty, survival, families and friendship under extraordinary circumstances during the Taliban’s rule in Afghanistan in the late 1990s.

In 2001, a war is raging in Afghanistan as a coalition of Western forces tries to oust the Taliban by bombing the country. Parvana’s father has died, and her mother, sister and brother have gone to a faraway wedding, not knowing what has happened to the father. Parvana doesn’t know where they are. She just knows she has to find them.

Parvana’s best friend, Shauzia, has escaped the misery of her life in Kabul, only to end up in a refugee camp in Pakistan. But she still dreams of seeing the ocean and eventually making a new life in France. This is the dream that has sustained her through the terrible years in Kabul. It is the dream for which she has forsaken family and friends.

My Name Is Parvana

In this stunning sequel to The Breadwinner Trilogy, Parvana, now fifteen, is found in a bombed-out school and held as a suspected terrorist by American troops in Afghanistan after the fall of the Taliban in 2001.