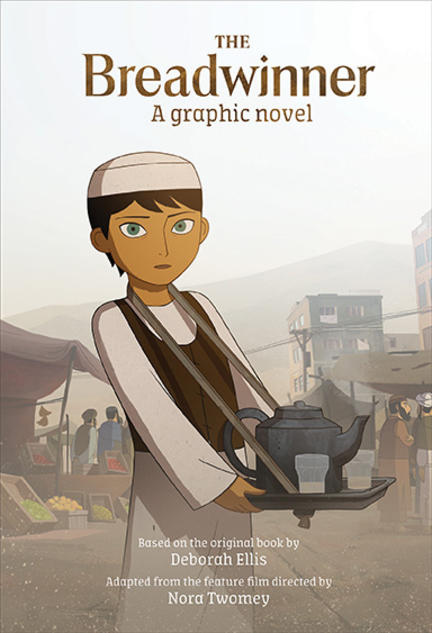 This beautiful graphic-novel adaptation of The Breadwinner animated film tells the story of eleven-year-old Parvana, who must disguise herself as a boy to support her family during the Taliban’s rule in Afghanistan in the late 1990s.

Parvana lives with her family in one room of a bombed-out apartment building in Kabul, Afghanistan’s capital city. Parvana’s father — a history teacher until his school was bombed and his health destroyed — works from a blanket on the ground in the marketplace, reading letters for people who cannot read or write. One day, he is arrested for having forbidden books, and the family is left without someone who can earn money or even shop for food.

As conditions for the family grow desperate, only one solution emerges. Forbidden to earn money as a girl, Parvana must transform herself into a boy, and become the breadwinner.

Readers will want to linger over this powerful graphic novel with its striking art and inspiring story.

CCSS.ELA-LITERACY.RL.4.1
Refer to details and examples in a text when explaining what the text says explicitly and when drawing inferences from the text.

The Breadwinner film was produced by Aircraft Pictures, Cartoon Saloon and Melusine Productions.

Cartoon Saloon is a two-time Academy Award nominee for the 2010 film The Secret of Kells and 2014’s Song of the Sea. The studio was formed in 1999 by Paul Young, Tomm Moore and Nora Twomey, and is based in Kilkenny, Ireland.

Melusine Productions is based in Luxembourg. They specialize in animated films and documentaries. Recent films include the award-winning Song of the Sea and Ernest & Celestine