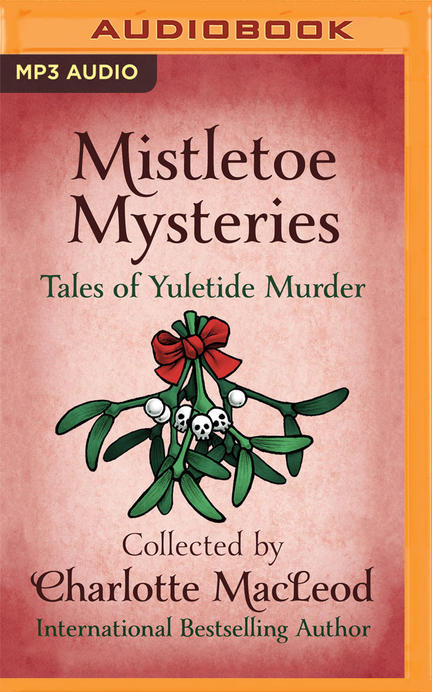 Peace on Earth isn't everyone's cup of tea in Charlotte MacLeod's “A Cozy for Christmas”.

Peter Lovesey's “The Haunted Crescent” delivers a holiday ghost story with a twist.

A training session for department-store Santas turns up Saint Nicks who are anything but angels in Isaac Asimov's “Ho, Ho, Ho”.

A long-married couple's ship finally comes in - only to spring a mysterious leak - in Mary Higgins Clark's “That's the Ticket”.

Scottish superstition catches up with a cat burglar in Sharyn McCrumb's “A Wee Doch and Doris”.

These and many more stories will keep you enthralled and gathering evidence of yuletide mayhem. So when holiday shopping brings out your inner Grinch, hunker down with a hot toddy - and leave the murder to the experts.

Charlotte MacLeod (1922-2005) was an internationally bestselling author of cozy mysteries. Born in Canada, she moved to Boston as a child, and lived in New England most of her life. After graduating from college, she made a career in advertising, writing copy for the Stop & Shop Supermarket Company before moving on to Boston firm N. H. Miller & Co., where she rose to the rank of vice president. In her spare time, MacLeod wrote short stories, and in 1964 published her first novel, a children's book called Mystery of the White Knight.

Malcolm Graeme has appeared on and off Broadway in "Aida, The King and I, " Lincoln Center's "Hapgood, " and "M. Butterfly" (National Tour). His television appearances include "Law & Order, Follow the River, " and "Mr. Halpern and Mr. Johnson" (with Laurence Olivier). Film credits include "A Further Gesture, The Adventures of Sebastian Cole, " and "Reunion."

Paul Boehmer is a seasoned actor who has appeared on Broadway, film, and television, including The Thomas Crown Affair and All My Children. Coinciding with another of his passions, sci-fi, Paul has been cast in various roles in many episodes of Star Trek.

Alexander Cendese is a New York–based actor/narrator whose credits include roles on and Off-Broadway, in films, and on popular television shows, including Law & Order: SVU and All My Children. He holds a BFA from the Carnegie Mellon School of Drama.

Other titles by Charlotte MacLeod

Something in the Water

The Corpse in Oozak's Pond

The Curse of the Giant Hogweed

Something the Cat Dragged In

The Luck Runs Out

Other titles by Graeme Malcolm

Other titles by Paul Boehmer

The Dragon at War

The Dragon and the Gnarly King

The Dragon and the George

The Dragon on the Border

The Dragon in Lyonesse

The Dragon and the Djinn

The Dragon and the Fair Maid of Kent

The Dragon, the Earl, and the Troll

Other titles by Jonathan Todd Ross

Other titles by Alexander Cendese

As Hot As It Gets