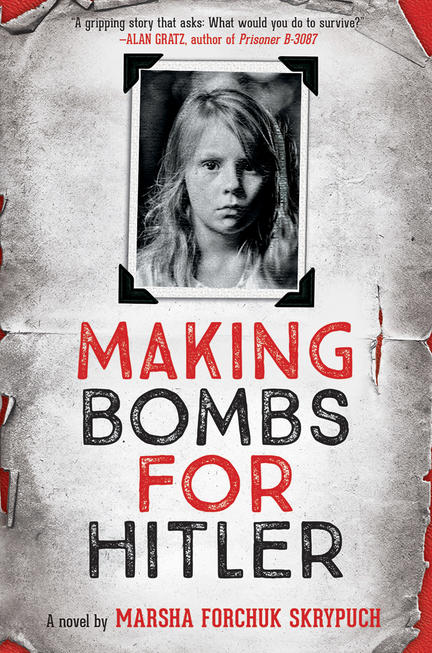 For readers who were enthralled by Alan Gratz's PRISONER B-3087 comes a gripping novel about a lesser-known part of WWII.

Lida thought she was safe. Her neighbors wearing the yellow star were all taken away, but Lida is not Jewish. She will be fine, won't she?But she cannot escape the horrors of World War II.Lida's parents are ripped away from her and she is separated from her beloved sister, Larissa. The Nazis take Lida to a brutal work camp, where she and other Ukrainian children are forced into backbreaking labor. Starving and terrified, Lida bonds with her fellow prisoners, but none of them know if they'll live to see tomorrow.When Lida and her friends are assigned to make bombs for the German army, Lida cannot stand the thought of helping the enemy. Then she has an idea. What if she sabotaged the bombs... and the Nazis? Can she do so without getting caught?And if she's freed, will she ever find her sister again?This pulse-pounding novel of survival, courage, and hope shows us a lesser-known piece of history -- and is sure to keep readers captivated until the last page.

MARSHA FORCHUK SKRYPUCH is the author of more than a dozen books, including Dear Canada: Prisoners in the Promised Land, Stolen Child, Making Bombs for Hitler, Underground Soldier and Don’t Tell the Enemy. She has won many awards for her work and is one of Canada’s most respected authors of historical fiction for young people. Much of Marsha’s writing focuses on stories from her Ukrainian heritage, and she has been presented with the Order of Princess Olha by the President of Ukraine and named a Canadian Ukrainian Woman of Distinction. Marsha lives in Brantford, Ontario. Visit her online at www.calla.com.

"In this room, you will be making bombs," said the supervisor. "The reason for no metal is because you could create a spark and that could cause an explosion." Making bombs? I suddenly felt weak at the knees. I had been so afraid of Allied bombs hitting us, yet our fate here was even worse. They expected us to make bombs for the Nazis, our enemies. The woman walked over to the table of metal parts and, with both hands, positioned one of the cylindrical pieces so it stood upright. "This is the body of the bomb." She turned it so we could see the hollow inside. "You will seal the bottom with this" – she held up a different metal part – "then fill the hollow part with Kordit." She set the cylindrical piece back down on the table and walked over to the array of strawlike bundles. "You must be very careful when you insert this metal straw. It is an explosive." The woman's mouth formed the words and I tried to pay attention to her demonstration, but I was so horrified that the room swirled. How could she ask us to do this? Didn't she know that we all were hoping and praying that the Allies would win? How could they force us to make these weapons? I took gulping breaths to keep from fainting as she explained what we had to do. I looked over at Zenia. Her face was ashen. Natalia's eyes were wide and her jaw was slack. We were all thinking the same thing. "Each of you was chosen for your deft fingers," said the supervisor. "And in case you're thinking of sabotaging these bombs, don't bother. You're being watched."

Praise for Making Bombs for Hitler:"A gripping story that asks: What would you do to survive?" -- Alan Gratz, author of Prisoner B-3087"Inspired by real, historical accounts, this is a powerful, harrowing story of transformation." -- Booklist"Skrypuch draws on real-life stories of survivors in telling Lida's poignant tale, and she creates a cast of young people who are devoted to one another in both thought and deed.... A well-told story of persistence, lost innocence, survival, and hope." -- Kirkus Reviews"The story [has a] strong undercurrent of friendship and loyalty; an author's note gives further background on this important piece of history." -- Publishers Weekly"Students will admire Lida's pluck amid such heinous conditions.... An absorbing read about the lesser-known Ukrainian experience during World War II, this is a solid choice for curricular ties and for middle school historical fiction collections." -- School Library Journal"Skrypuch has written a gripping, emotional novel of one Ukrainian girl's perseverance during the horrors of war.... This is a vivid picture of what youth experienced during World War II and the hopelessness of displaced populations of all backgrounds and religions." -- VOYA

With Making Bombs for Hitler, author Marsha Skrypuch continues the story of two sisters, Lida and Larissa, that she began with Stolen Child.

Making Bombs for Hitler is Lida’s story. Lida’s mother had said it was possible to find beauty anywhere, but she — like Lida’s father and grandmother — was killed before her daughters were captured by the Germans. Beauty is almost impossible to find in a brutal Nazi slave labour camp. But Lida’s strongest motivation to survive is her quest to find her beloved younger sister, Larissa.

Lida knows she needs to remain useful in the camp if she is to survive — and death can happen at any time. Doctors and nurses will kill those deemed “unfit” to be part of the Nazi “machine.” Guards can barely wait for an excuse to berate, brutalize or kill their prisoners. There is the gnaw of hunger and the reality of misery and torture everywhere. Then Lida and some of her friends are given a new work assignment: making bombs — a task they have no choice but to undertake. It is a blessing that by now she knows there is beauty, even in the camp — in a shared song or story, a loving memory, a selfless act of resistance.

These gifts sustain her, both as a prisoner, and later, in a refugee camp, where she is finally safe. All she has to do is somehow find dear Larissa and a way back home. But finding Larissa will take nothing short of a miracle. And if the rumours about the Ukraine are true, going home may never happen.

Making Bombs for Hitler is an achingly sad and intensely hopeful novel — honest about suffering, but also about resilience. It is gripping in its plot and its striking characters, and full of historical accuracy.

In Stolen Child, it takes Larissa almost the entire novel to remember her real name and her past. She spent five years in a Displaced Persons camp with the loving couple who have brought her to Brantford, Ontario. She knows that she must refer to Marusia and Ivan as her mother and father or they will all risk losing their place in Canada. She must also go by the name Nadia. But disturbing, disjointed flashbacks and nightmares are raising troubling questions.

Why are her happy memories infused with the colour and scent of lilacs? Why are her horrible memories tied to blood and flames and desperate cries? Who are her real mother and sister? And why is she almost certain the boys who call her a Nazi are right?

Stolen Child brilliantly and deftly deals with the horrifying issues of post-traumatic stress disorder and the Lebensborn program (the Nazis stole blond, blue-eyed Polish and Ukrainian children and brainwashed them before placing them with their ‘rightful’ Nazi families). Larissa became one such child, and the road back to the truth is terrifying. She must have courage if she is ever to have peace or find Lida.

During World War II, nine-year-old Lida and her sister are kidnapped by the Nazis and separated. Lida is forced to work in brutal conditions at a German munitions factory as a slave labourer. Fed only bread and soup and wearing a thin dress and no shoes, she works from dawn to dusk. Lida prays she will one day find her sister and escape the war. This is the companion novel to Stolen Child.

Other titles by Marsha Forchuk Skrypuch

Sky of Bombs, Sky of Stars

Too Young to Escape

A Vietnamese Girl Waits to be Reunited with Her Family