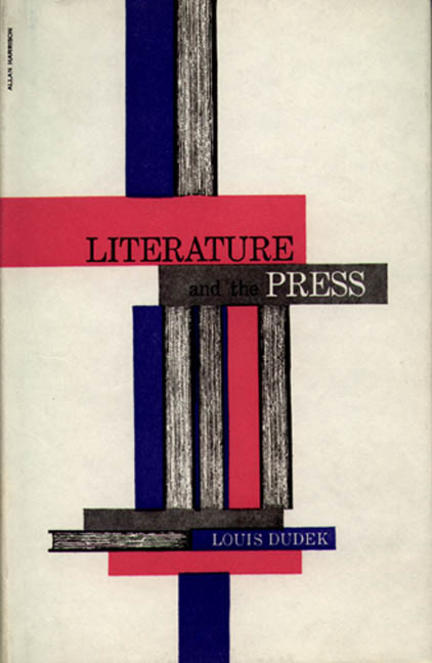 What is the effect of the Industrial Revolution in Printing on permanent literature and literary standards? Literature and the Press provides both theory and background for this discussion, so crucial to our own sense of historical canon, mass communications, and enduring literary quality. It should be read by every student of nineteenth and twentieth century literature.
Literature and the Press is a rare book, available in very limited quantities.

Karis Shearer is currently a doctoral candidate at The University of Western Ontario, where she is completing her dissertation on postmodern cultural workers and the Canadian long poem. She has published articles on women’s writing and the poetry of Lynn Crosbie, and has guest-edited an issue of Open Letter on new Canadian fiction writers.

Louis Dudek was one of Canada’s most important and influential cultural workers. After gaining his PhD from Columbia University, Dudek in 1951 returned from New York to Montreal, the city of his birth, to take up a position as professor of English at McGill. Dudek’s return to Canada marked the beginning of his efforts to revolutionize the Montreal poetry scene through little magazines and small-press publishing, providing alternatives to commercial presses and opportunities for talented young poets. In 1956 he started The McGill Poetry Series, which gave a start to several young poets, including Leonard Cohen. The author of numerous books of poetry, Louis Dudek died in 2001.

Frank Davey has been a poet, editor, small-magazine publisher, literary critic, and cultural critic in Canada since 1961. He is editor and co-founder of the influential poetry newsletter Tish (1961-63) and since 1965 editor of Open Letter, the Canadian journal of writing and theory. With Fred Wah in 1984, he founded SwiftCurrent, the world’s first online literary magazine, and operated it until 1990. His more than forty books include Louis Dudek and Raymond Souster (1980), The Abbotsford Guide to India (1986), Reading Canadian Reading (1988), Canadian Literary Power (1994), and Back to the War (2005).

Other titles by Louis Dudek

Making of Modern Poetry in Canada

The Making of Modern Poetry in Canada

The Birth of Reason