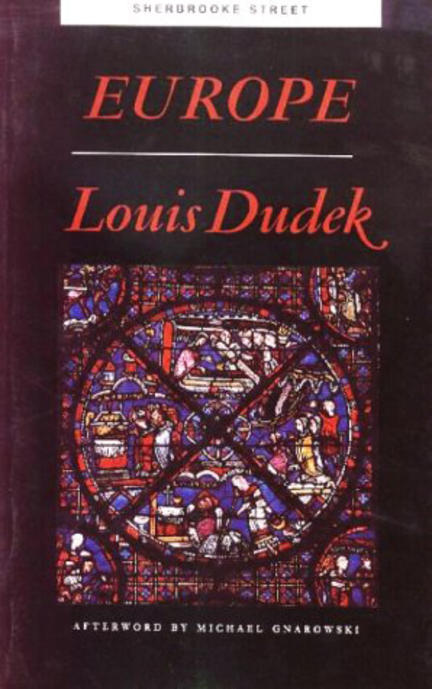 Europe is the poetic journal of Louis Dudek's cultural pilgrimage to the famous buildings and fabled sites of Europe. Although the sections of the poem are arranged chronologically in the order of his journeyings, the poem is less the story of Dudek's travels than a series of moral and aesthetic meditations prompted by his experiences. Expecting to find in Europe culture in its most evolved forms, the poet is confronted instead by materialism and superficiality, by exhausted peoples who are the unworthy inheritors of past greatness.

Eventually the poet comes to realize that it is the sea, 'constant always in beauty,' that is the real object of his quest.

Karis Shearer is currently a doctoral candidate at The University of Western Ontario, where she is completing her dissertation on postmodern cultural workers and the Canadian long poem. She has published articles on women’s writing and the poetry of Lynn Crosbie, and has guest-edited an issue of Open Letter on new Canadian fiction writers.

Louis Dudek was one of Canada’s most important and influential cultural workers. After gaining his PhD from Columbia University, Dudek in 1951 returned from New York to Montreal, the city of his birth, to take up a position as professor of English at McGill. Dudek’s return to Canada marked the beginning of his efforts to revolutionize the Montreal poetry scene through little magazines and small-press publishing, providing alternatives to commercial presses and opportunities for talented young poets. In 1956 he started The McGill Poetry Series, which gave a start to several young poets, including Leonard Cohen. The author of numerous books of poetry, Louis Dudek died in 2001.

Frank Davey has been a poet, editor, small-magazine publisher, literary critic, and cultural critic in Canada since 1961. He is editor and co-founder of the influential poetry newsletter Tish (1961-63) and since 1965 editor of Open Letter, the Canadian journal of writing and theory. With Fred Wah in 1984, he founded SwiftCurrent, the world’s first online literary magazine, and operated it until 1990. His more than forty books include Louis Dudek and Raymond Souster (1980), The Abbotsford Guide to India (1986), Reading Canadian Reading (1988), Canadian Literary Power (1994), and Back to the War (2005).

'Far from being ''tourist poetry,'' Europe is a high-minded attempt to examine both Europe's cultural artefacts and a North American mind built upon them. It shares the virtues and limitations of Dudek's other work: beautifully wrought lines, intelligence, and clarity in perception, tempered by a lack of humour and a certain arid quality.'

'The polemic stance in Europe [Dudek's] 1954 opus, here reprinted with minor emendations in a handsome edition, complete with author's preface and afterword by Michael Gnarowski, may be irksome to some readers. But Dudek's comments on the decline of western civilization are still valid. Essentially, the book uses the structural paradigm of a transatlantic cruise to contrast the ageless ''indifferent benevolence'' of sea and rivers with the fickle ways of men, and so to highlight the devolution of renaissance culture in Europe. The form of poetic diary absorbs any esoterica, so we have Dudek's strong companionable voice as tour guide.

'The book is a young man's book, not Dudek's best, of course. Nevertheless, it is refreshing to see how well the parody and technique hold up after all these years.'

Other titles by Louis Dudek

Making of Modern Poetry in Canada

The Making of Modern Poetry in Canada

Literature and the Press

The Birth of Reason