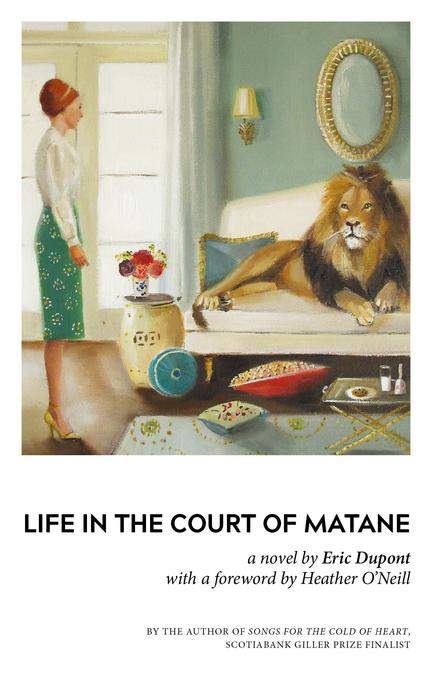 Nadia Comaneci's gold-medal performance at the Olympic Games in Montreal is the starting point for a whole new generation. Eric Dupont watches the performance on TV, mesmerized. The son of a police officer (Henry VIII) and a professional cook - as he likes to remind us - he grows up in the depths of the Quebec countryside with a new address for almost every birthday and little but memories of his mother to hang onto. His parents have divorced, and the novel's narrator relates his childhood, comparing it to a family gymnastics performance worthy of Nadia herself.

Life in the court of Matane is unforgiving, and we explore different facets of it (dreams of sovereignty, schoolyard bullying, imagined missions to Russia, poems by Baudelaire), each based around an encounter with a different animal, until the narrator befriends a great horned owl, summons up the courage to let go of the upper bar forever, and makes his glorious escape.

ERIC DUPONT was born in Gaspésie in 1970. He is a teacher and translator in Montréal. Sugar Thieves (Voleurs de sucre) is his first novel. His second novel La Loguese won the French language CBC's Canada Reads (Le Combats des livres) in 2008.

Originally from Ireland, Peter McCambridge holds a BA in modern languages from Cambridge University, England, and has lived in Quebec City since 2003. He runs Québec Reads and QC Fiction. His translations have been World Literature Today Notable Translations, longlisted for Canada Reads, and finalists for the Giller Prize and the Governor General's Award for Translation.

&ldquo This novel from Dupont ... the first from a new fiction imprint dedicated to publishing “the very best of a new generation of Quebec storytellers in flawless English translation,' lives up to that ambition. ... By turns poignant, playful, and nostalgic, the book evokes '70s Quebec with the quirky but successful device of combining an autobiographical family story with motifs drawn from fable, history, politics and myth. ... Translator McCambridge beautifully captures the joyous top notes and the darker undercurrents of this fascinating voice. &rdquo (Publishers Weekly)

&ldquo a captivating voice that sharply trapezes between a heightened version of his parents' divorce and life in the countryside ... Eric's insights brim with intelligence. &rdquo (Foreword Reviews)

&ldquo With an excellent translation by McCambridge, one which reads smoothly and keeps the humour which undoubtedly pervades the original, Dupont's novel makes for an entertaining look at a Québécois childhood. ... It all makes for an impressive start for QC Fiction. &rdquo (Tony Malone, Tony's Reading List)

&ldquo At the time, it seemed all of Quebec was trying to stay aloft between many sets of uneven bars. There was the feud between the sovereigntists and the federalists keeping society off-balance ... The conservative traditionalism of the Duplessis era was disappearing in favour of the more progressive values of the Quiet Revolution. Religious faith was dissipating in Quebec homes, yet children were still being taught by nuns in Catholic schools. Comaneci's gymnastics set the scene for an exploration of all these faultlines in Dupont's autobiographical novel, Life in the Court of Matane. ... For the informed, and for those prepared to laugh at Quebec's peccadilloes, this is a hilarious romp.&rdquo (Quill & Quire)

&ldquo a classic coming-of-age novel worth pondering over &rdquo (Steven Buechler, The Library of Pacific Tranquility)

Other titles by Eric Dupont

Songs For The Cold Of Heart

Other titles by Peter McCambridge

Songs For The Cold Of Heart

The History of Montréal

The Adventures of Radisson

The Girl Who Was Saturday Night