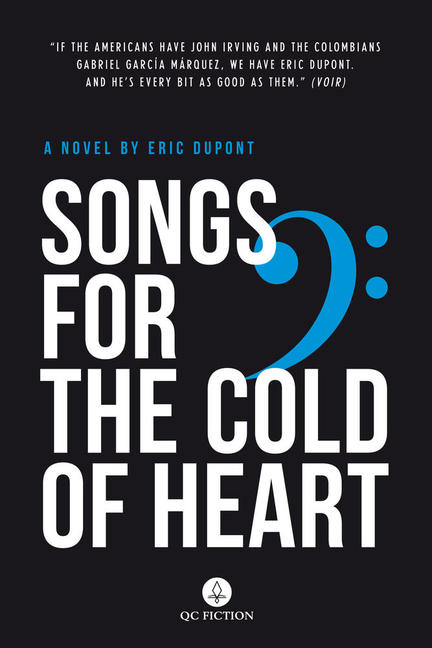 Nuns that appear out of thin air, a dinner party at the Goebbels’, Quebec’s very own Margaret Thatcher, a grandma that just won’t die (not until the archangel comes back)...Songs For The Cold Of Heart is a yarn to rival the best of them, a big fat whopper of a tall tale that bounces around from provincial Rivière-du-Loup in 1919 to Nagasaki, 1990s Berlin, Rome, and beyond. This is the novel of a century—long and glorious, stuffed full of parallels, repeating motifs, and unforgettable characters—with the passion and plotting of a modern-day Tosca.

ERIC DUPONT was born in Gaspésie in 1970. He is a teacher and translator in Montréal. Sugar Thieves (Voleurs de sucre) is his first novel. His second novel La Loguese won the French language CBC's Canada Reads (Le Combats des livres) in 2008.

Originally from Ireland, Peter McCambridge holds a BA in modern languages from Cambridge University, England, and has lived in Quebec City since 2003. He runs Québec Reads and QC Fiction. His translations have been World Literature Today Notable Translations, longlisted for Canada Reads, and finalists for the Giller Prize and the Governor General’s Award for Translation.

“Check the shelves in just about every household in Quebec with any inclination toward literary fiction and you will find a copy of Dupont’s novel. It’s the Thriller or ABBA’s Greatest Hits of its world, with a popular reach most serious writers stopped dreaming of decades ago. It’s fair to say, then, that the novel now finally available in English as Songs for the Cold of Heart is significant as a socio-cultural phenomenon, irrespective of its literary merits. Happily, those merits are many and varied.” —Ian McGillis, Montreal Review of Books

"An emerging voice in Quebec fiction, Dupont releases his second novel to be translated into English, presenting an epic family saga peppered with tall tales, sex, humor, unspeakable tragedy, and a touch of magic realism. Beginning with the Christmas birth of Louis Lamontagne, we follow the exploits of this larger-than-life strongman, lothario, and eventual funeral director, before moving onto his daughter, Madeleine, who opens a successful chain of diners. The last half of the book focuses on Madeleine's son Gabriel, a gentle dimwit and ladies' man who tracks a woman to Berlin but gets distracted by Magda Berg, an elderly neighbor who shares a long narrative about her World War II experiences and reveals unexpected connections to the Lamontagne family. Wildly ambitious in scope and structure, Dupont's novel (originally titled La Fiancée Américaine) mostly succeeds in throwing many balls into the air and having each land where it has the most impact. Readers may be tempted to start the book again to pick up all the clues they missed the first time through. The entire work is a testament to the power, and pitfalls, of storytelling. Through exaggeration, selective memory, and perspective, whose version of the story can we believe? VERDICT Highly recommended." —Christine DeZelar-Tiedman, Univ. of Minnesota Libs., Minneapolis

"An epic, rambling, decades-spanning, vastly entertaining book. (...) If you read only one fiction book this year, make it this one. Five stars" —James Fisher, The Miramichi Reader

Other titles by Eric Dupont

Other titles by Peter McCambridge

The History of Montréal

The Adventures of Radisson