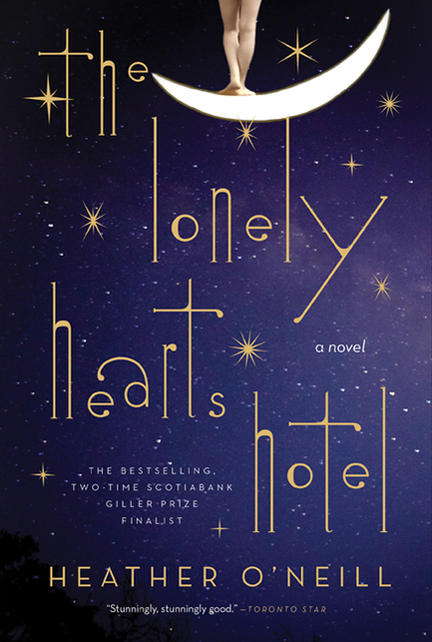 Longlisted for the 2017 Baileys Women’s Prize for Fiction

A Globe and Mail Most Anticipated Book

A NOW Magazine Book You Have to Read

A Toronto Star Book We Can’t Wait to Read

“Heather O’Neill is just getting better and better.” —The Globe and Mail

“It would be hard to overstate here just how the good the writing is in The Lonely Hearts Hotel. For it is stunningly, stunningly good.” —Toronto Star

“By the end I was a gasping, tearful mess.” —Miranda July, author of The First Bad Man and No One Belongs Here More Than You

“O’Neill is an extraordinary writer, and her new novel is exquisite.” —Emily St. John Mandel, author of Station Eleven

Set in Montreal and New York between the wars, a spellbinding story about two orphans whose unusual magnetism and talent allow them to imagine a sensational future, from bestselling, two-time Scotiabank Giller Prize finalist Heather O’Neill

The internationally acclaimed author returns with a stunning national bestseller in The Lonely Hearts Hotel. Exquisitely imagined and hypnotically told, it is a love story with the power of legend.

Two babies are abandoned in a Montreal orphanage in the winter of 1914. Before long, their true talents emerge: Pierrot is a piano prodigy; Rose lights up even the dreariest room with her dancing and comedy. As they travel around the city performing for the rich, the children fall in love with each other and dream up a plan for the most extraordinary and seductive circus show the world has ever seen.

Separated as teenagers, both escape into the city’s underworld, where they must use their uncommon gifts to survive without each other. Ruthless and unforgiving, Montreal in the 1930s is no place for song and dance, depicted by O’Neill as “a voyage across Montreal, from realms of innocence and districts of longing to zones of cruelty” (National Post). When Rose and Pierrot finally reunite they’ll go to extreme lengths to make their childhood dreams come true.

“The Girl Who Was Saturday Night is Heather O’Neill’s second novel, and it is the book where she emerges as a fully-formed artist.”

“Heather O’Neill does it again! The Girl Who Was Saturday Night is full of quaking love and true sadness, family rackets, heart attacks, feral cats of all sorts, risky trysts, and reeling abandon. O’Neill’s voice is singular, brave, magical, and bursting with stark beauty.”

“Heather O’Neill is just getting better and better.”

“In a love story of epic proportions, O’Neill’s excellent historical novel plumbs the depths of happiness and despair. . . . This novel will cast a spell on readers from page one.”

“The writing in Daydreams of Angels is characteristically crisp and playful, but with an undercurrent of cruelty that only amplifies each story’s beating heart.”

“O’Neill’s unique strength as a prose stylist has always been in the strength of her individual sentences, and in The Girl Who Was Saturday Night, the way she wields an image feels less like style than superpower.”

“[These stories are] united by the now-unmistakable O’Neill stamp: compassionately drawn characters from society’s fringes acting out tales of hardship, resilience and sometimes redemption, all told in deceptively simple prose - nobody, but nobody, does simile quite like O’Neill - that at its best attains the level of music.”

“The Lonely Hearts Hotel sucked me right in and only got better and better, ultimately becoming much tougher, wiser than I was prepared for. I began underlining truths I had hungered for but never before read. By the end I was a gasping, tearful mess.”

Miranda July, author of The First Bad Man and No One Belongs Here More Than You

“[The Lonely Hearts Hotel] is a voyage across Montreal, from realms of innocence and districts of longing to zones of cruelty. . . . It’s a sprawling saga that combines a fairy-tale narrative with touches of social history, following two orphans in their struggles against a hostile world.”

“A dazzling leap forward. . . . O’Neill writes like a sort of demented angel with an uncanny knack for metaphor.”

“Heather O’Neill’s style is laced with so much sublime possibility and merciless reality that it makes me think of comets and live wires and William Blake’s “The Tyger.” Between prose like that and a story like this, you have a book that raises goosebumps and the giddiest of grins.”

“O’Neill is a mistress of metaphor and imagery…This is brilliant tragicomedy…in a melancholy love story that brings to life the bygone days of theatrical revues.”

“A larger-than-life, gritty love story that reads like a fable. . . . The greatest strength of O’Neill’s work, however, is her wholly unique narrative voice, which is at once cool and panoramic, yet shockingly intimate and wisely philosophical. The novel brims with shimmering one-liners.”

“The Lonely Hearts Hotel is gaudy, rowdy and magnificent.”

“This simultaneously heart-breaking and life-affirming novel depicts the range of the human experience through the eyes of its almost preternaturally charismatic hero and heroine… O’Neill’s prose is gorgeous, with arresting imagery.”

“Walking the hypnotic line between tragedy and fairy tale. . . . the love story that unfolds is a fable of ambition and perseverance, desperation and heartbreak. . . Big and lush and extremely satisfying; a rare treat.”

“A fairy tale laced with gunpowder and romance and icing sugar, all wrapped round with a lit fuse. Each of Heather O’Neill’s sentences pricks or delights. If you haven’t read her other books, start with this one and then read all of the rest.”

Kelly Link, author of Pulitzer Prize finalist Get in Trouble

“An exuberantly written coming-of-age story ... Flashbulb-bright and memorable ... Nicolas and Nouschka are the beautiful, frozen, fetishised symbols of separatist Quebec. As they try to wrench themselves into being, their story is as entrancing and antic and sensual as a dream”

“Fans of the Canadian author’s swirling, lyrical prose will fall for this melancholic love story set in gritty 1920s Montreal.”

“It would be hard to overstate here just how the good the writing is in The Lonely Hearts Hotel. For it is stunningly, stunningly good.”

“The novel’s success resides in its deeply loveable protagonists navigating a world of brutality and melancholy. . . . Grotesqueness and pleasure run together in The Lonely Hearts Hotel.”

“O’Neill is an extraordinary writer, and her new novel is exquisite. . . .O’Neill has taken on sadness itself as a subject, but it would be terribly reductive to say that this book is sad; it’s also joyful, funny, and vividly alive.”

“Walks a tightrope between social and magical realism . . . . She grafts Angela Carter-esque fairytale darkness on to her forays into her native Montreal’s gothic underbelly . . . A gritty, giddy fairyground ride of a book [involving] rapture, wonder and an unquenchable faith in the extraordinary.

This story is intriguing, sad, beautiful, and, ultimately, a little bit tragic. But, the writing – oh, the writing! I’m absolutely besotted with O’Neill’s writing style. Her style is almost poetic, and her imagination shines through her imagery:

He doused his words in alcohol and set them on fire.

His white carnation boutonniere looked like a crumpled-up love poem.

This is a roller coaster of emotion and a page turner. It’s well worth the read. I strongly encourage readers to try, as best they can, to get through as much of this book as possible before giving up on it.

Also, remember that not all stories involve people with perfect lives. This book is quite honest about life in the early 1900’s – poverty, abuse, drugs, women being treated like property, etc. I’ve seen a lot of reviews where people quit early in the book because of all the despair, but the despair is part of life and part of the beauty of this book.

The Girl Who Was Saturday Night

"A few speculative works, a few dystopias, an interest in the nature of God and of the human, and, especially, most of them, lovingly rendered character …