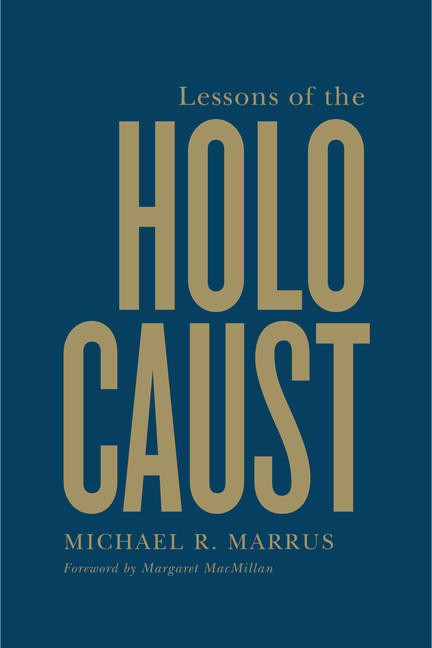 Although difficult to imagine, sixty years ago the Holocaust had practically no visibility in examinations of the Second World War. Yet today it is understood to be not only one of the defining moments of the twentieth century but also a touchstone in a quest for directions on how to avoid such catastrophes.

In Lessons of the Holocaust, the distinguished historian Michael R. Marrus challenges the notion that there are definitive lessons to be deduced from the destruction of European Jewry. Instead, drawing on decades of studying, writing about, and teaching the Holocaust, he shows how its “lessons” are constantly challenged, debated, altered, and reinterpreted.

A succinct, stimulating analysis by a world-renowned historian, Lessons of the Holocaust is the perfect guide for the general reader to the historical and moral controversies which infuse the interpretation of the Holocaust and its significance.

Michael R. Marrus is the Chancellor Rose and Ray Wolfe Professor Emeritus of Holocaust Studies and the former dean of the School of Graduate Studies at the University of Toronto.

MARGARET MacMILLAN is the renowned author of Women Of The Raj, Stephen Leacock (Extraordinary Canadians series), and the international bestsellers Nixon In China and Paris 1919: Six Months That Changed the World, which won the 2003 Governor General’s Award and the 2002 Samuel Johnson Prize. She is also the author of The Uses and Abuses of History. The past provost of Trinity College at the University of Toronto, she is now the warden of St. Antony’s College at Oxford University.

"Lessons of the Holocaust is a joy to read. Written with clarity and verve, it covers a lot of ground elegantly and efficiently. But be prepared; at some point, it will hit you how profoundly this book has challenged what you thought you knew about the Holocaust."

"This book makes for great reading in introductory classes on the Holocaust and especially in those on Holocaust memory."

‘Lessons of the Holocaust is a masterful work of far-reaching significance for scholars, undergraduates and graduate students, and non-specialists that only gains in relevance with time.’

‘Marrus offers a bold and superb assessment of prescriptions drawn from Holocaust history. This is as much an exploration of the uses and abuses of Holocaust history as an intellectual biography, a commentary on decades of studying and teaching the Holocaust.’

Other titles by Michael R. Marrus

Canada and the World

Lessons of the Holocaust

Other titles by Margaret MacMillan

Personalities and the Past

Lessons of the Holocaust

Personalities and the Past

The War That Ended Peace

War That Ended Peace, The

The Uses and Abuses of History

Canada and Australia in the Twentieth Century

The Week That Changed The World