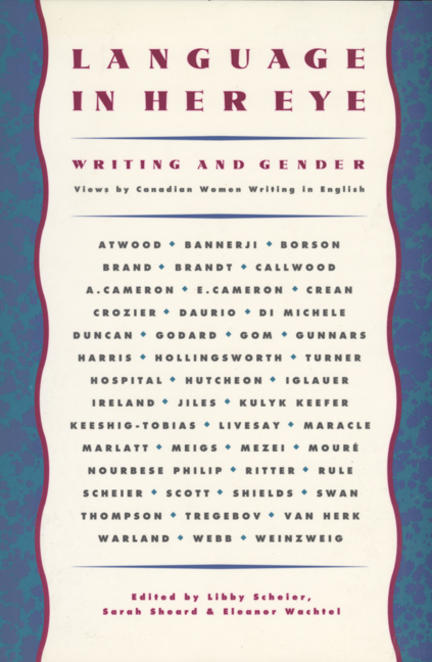 This collection of original essays, articles, and commentaries by 44 distinguished authors, poets, fiction writers, essayists, biographers, and journalists includes contributions from Margaret Atwood, Dionne Brand, June Callwood, Barbara Godard, Janette Turner Hospital, Linda Hutcheon, Paulette Jiles, Dorothy Livesay, Daphne Marlatt, Erin Moure, Erika Ritter, Jane Rule, Gail Scott, Carol Shields, and Susan Swan. Topics include the existence?or lack thereof?of a specifically female or feminist point of view; appropriation of voice; the influence of various currents in feminist literary theory; the particular versus the universal, and the ambiguities inherent in such issue. Articulate, revelatory, and humorous, these essays are essential reading for those interested in the most transformative and influential social and cultural movement of this century.

Sarah Sheard is the author of two other critically acclaimed novels, The Swing Era, and the national bestseller The Hypnotist. Sarah won the 45 Below Award for her fiction, and a National Magazine Award for her essay on the Coach House Press. She lives in Toronto, where she mentors writers at Humber College and Ryerson Polytechnic University, and maintains a private practice as a psychotherapist and mediator.

Eleanor Wachtel is a writer and broadcaster who has hosted CBC Radio’s award-winning Writers & Company since its inception in 1990 and The Arts Today since 1996. In addition to her widely acclaimed Writers & Company and More Writers & Company, she contributed to Dropped Threads and Lost Classics and has co-authored or co-edited three other books. Her work has also appeared in numerous magazines and newspapers, including Saturday Night, Maclean’s and The Globe and Mail. Among the many honours she has received in recognition of her contribution to Canadian intellectual and cultural life, she won the 2002 Jack Award for supporting Canadian books and authors. Born and raised in Montreal, where she studied English literature at McGill University, Eleanor Wachtel lives in Toronto.

Other titles by Libby Scheier

Kaddish For My Father

Other titles by Sarah Sheard

Love in the New Dark Times

Other titles by Liba Scheier

Branching Out Magazine and the Making of Canadian Feminism

The Best of Writers & Company