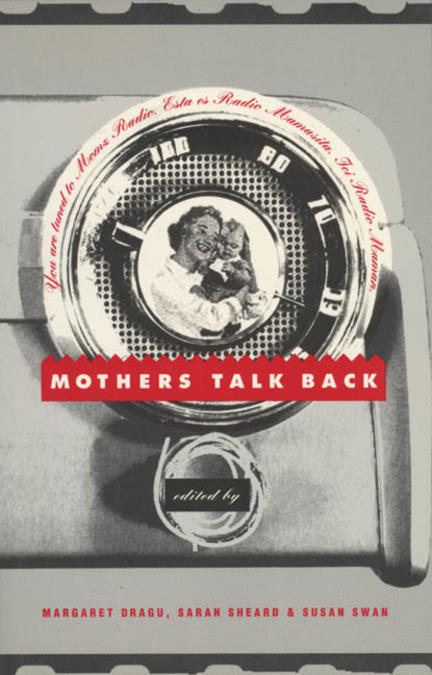 Humorous, ribald, powerful, and filled with wisdom, anecdotes, and shared affirmations, this collection of voices—single and working moms, moms creating extended families, a mom with a special-needs child, moms trying to balance their needs against those of their children—celebrates the quiet heroism of mothers. Inspired by Margaret Dragu's radio program, this book features 15 true accounts of mothering—not the baby-blue-and-pink, sanitized nursery rhyme presented in the popular media, but explorations of the enormous (and underacknowledged) transformation that motherhood brings to a woman's sense of self, her mate, her body, and her connection to mothers throughout history.

Sarah Sheard is the author of two other critically acclaimed novels, The Swing Era, and the national bestseller The Hypnotist. Sarah won the 45 Below Award for her fiction, and a National Magazine Award for her essay on the Coach House Press. She lives in Toronto, where she mentors writers at Humber College and Ryerson Polytechnic University, and maintains a private practice as a psychotherapist and mediator.

SUSAN SWAN's fiction has been published in twenty countries and received numerous honours. Her first novel, The Biggest Modern Woman of the World (1983), was a finalist for the Governor General’s Award for fiction and the Smith’s Best First Novel Award, and is currently being made into a film. Her other books include the short story collection Stupid Boys are Good to Relax With (1996), the novel Last of the Golden Girls (1989), and The Wives of Bath (1993). The film adaptation of The Wives of Bath, called Lost and Delirious, has been released in 32 countries and was featured as a Premiere Selection at the 2001 Sundance Film Festival. Her most recent novel, What Casanova Told Me (2001), was published to rave reviews. Susan Swan lives in Toronto, Ontario, and is an associate professor of Humanities at York University.

Other titles by Margaret Dragu

Essays on Striptease and Sexuality

Other titles by Sarah Sheard

Love in the New Dark Times

Language in Her Eye

Views on Writing and Gender by Canadian Women Writing in English

Other titles by Susan Swan

The Biggest Modern Woman of the World

What Casanova Told Me

The Biggest Modern Woman Of World

The Wives of Bath

Last of the Golden Girls