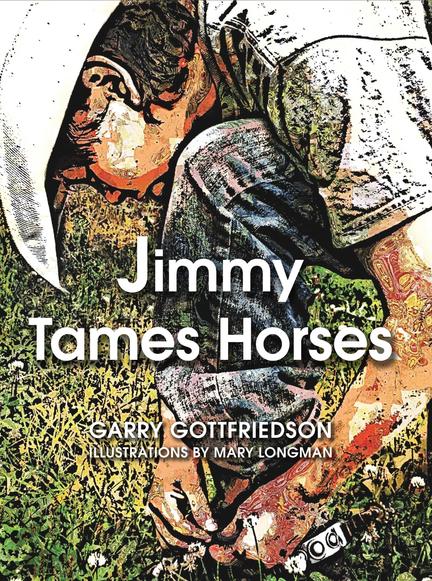 Jimmy Tames Horses is a story about a little boy from the city who tries to fit in with his cousins who have always lived on the Kamloops Indian Reserve. Throughout the summer Jimmy works with a colt, overcoming initial fears and eventually becoming a famous horse breaker.

Garry Gottfriedson, from the Secwepemc nation (Shuswap), was born, raised and lives in Kamloops, B.C. Growing up on a ranch in a ranching and rodeo family, he has been fully immersed in his people’s traditions and spirituality. He comes from four generations of horse people. His passion for horses, raising and training them, still continues to this day. He holds a Master of Education from Simon Fraser University and has studied Creative Writing at the Naropa Institute in Boulder, Colorado. His published works include 100 Years of Contact (SCES, 1990); In Honour of Our Grandmothers (Theytus, 1994); Glass Tepee (Thistledown, 2002, and nominated for First People’s Publishing Award 2004); Painted Pony (Partners in Publishing, 2005); Whiskey Bullets (Ronsdale, 2006, and Anskohk Aboriginal Award finalist); Skin Like Mine (Ronsdale, 2010, and shortlisted for Canadian Authors Association Award for Poetry); Jimmy Tames Horses (Kegedonce, 2012); Chaos Inside Thunderstorms (Ronsdale, 2014); Deaf Heaven (Ronsdale, 2016). His works have been anthologized both nationally and internationally. He has read from his work across Canada and in the USA, Europe and Asia.

Mary Longman Aski-Piyesiwiskwew is a renowned Saulteaux visual artist from the Gordon Band near Punnichy, Saskatchewan. Her work has been exhibited in such venues as The National Art Gallery and The Museum of Civilization. She has a degree from The Emily Carr Institute of Art and Design and a Masters degree from The Nova Scotia College of Art. She is currently a Ph.D Candidate in Art Education at the University of Victoria.

Paul Seesequasis is a writer and journalist. He was the founding editor of the award-winning Aboriginal Voices magazine, recipient of a MacLean-Hunter journalist award, a broadcaster and writer. His short stories and feature writings have been published in Canada and abroad. Tobacco Wars is his first novella.

Other titles by Garry Gottfriedson

The Kamloops Indian Residential School - Resistance and a Reckoning

Other titles by Mary Longman

Other titles by Paul Seesequasis