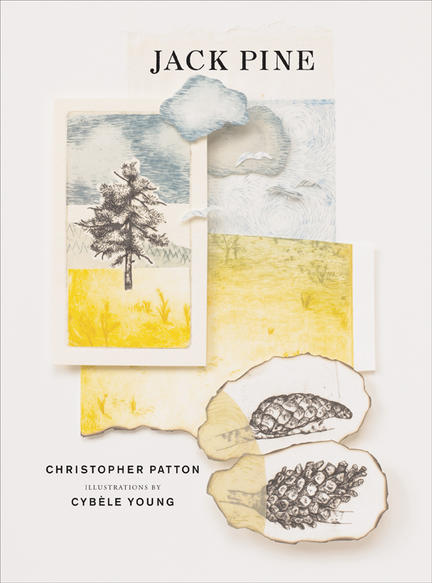 Jack Pine is an exquisite celebration of a tenacious tree.

In a poem as knotty and beautiful as the tree itself, Christopher Patton tells the story of one Jack Pine, and conveys the splendor of the pine forests that once covered much of eastern North America. Cybele Young's exquisite illustrations, ingenious three-dimensional collages of etched paper, bring to life Jack Pine and a world of stony fields, pine woods, farmers and forest animals.

Christopher Patton is a Canadian poet living in the United States, where he teaches courses on ecopoetics and visual poetry at Western Washington University. His asemic visual poetry has been shown at the Minnesota Center for Book Arts and the Whatcom Museum. Patton’s books include Ox, whose first section won the Paris Review’s long poem prize, and Curious Masonry, an earlier volume of Old English translations. He blogs at theartofcompost.com.

This is a refreshingly original way to win some fans among young readers for an example of Canada's biodiversity.

The generous use of white space invites readers to savor the poetic lines and the visual poetry as well.

This is a remarkable, effective blend of poetry and botany...Patton changes our imagination...while subtly, triumphantly, communicating botanical and ecological truths...The creative combination of accomplished verbal and visual art, as well as science, makes this a prime candidate for use in school as well as enjoyment at home.

A fabulous read-aloud for elementary school children, especially those studying nature, trees or the environment...Penned like a poem, in short vignettes easy to read, Jack Pine is an amazing nature story based in truth.

...Young's exquisite, three-dimensional etched-paper collages are, somewhat paradoxically, the medium that makes visual and visible a most unprepossessing tree...There's a fine and pleasing symmetry here between the plain-spoken but ultimately eloquent verse and the unlovable tree and its ultimate nobility.

Have you met Jack Pine? He’s gnarled but he’s got a tender side for he is also a “nurse tree” that shelters the seedlings of other trees. Christopher Patton employs personification in his poem to introduce us to this tenacious tree. Three-dimensional etched paper collages round out this arboreal tribute.

Other titles by Christopher Patton

Fourteen from the Exeter Book

Other titles by Cybele Young