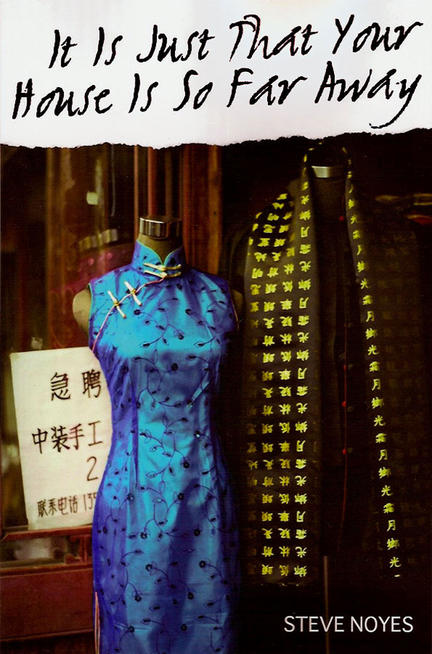 Divorced and approaching forty, Jeff Mott decides to leave his ex-wife and young daughter behind in Canada and travel to China. He starts teaching in a small town north of Beijing, and meets a young woman, Wang Bian Fu, and falls in love; however, as they get to know each other, Bian Fu's family life and emotions seem increasingly more complex and disturbing. Their relationship becomes dominated by the walls and back alleys of Beijing, where they find humiliations, surprising differences, and barriers. Against the odds, they become engaged.

Jeff discovers that there are many ways of being the foreigner, the outsider in China, not all of them savoury. As he teaches his students English, his students teach him that there is much more to being Chinese than language. And classroom spies are all too happy to report inappropriate discourse or behaviour. One must never forget, there are manners and rules.

One day Jeff learns the truth about his Chinese fiancée, a truth which has been concealed behind Bian Fu's considerable deception. His heart divided, Jeff must make a choice, and flies back to Canada, promising to return. Bian Fu promises to solve the barriers to their marriage "in a Chinese way." Separated, the lovers continue to plan, through their heated and awkward long-distance telephone calls, and through the Chinese characters, the ancient poems and proverbs, mangled in Jeff's fumbling words. As they head towards marriage, Jeff wonders, is it Bian Fu that he loves? or China? Or is it that he has imagined both of them as he wishes, not as they are?

Noyes has perfectly captured the foreigner's experience in Asia. Poignant, ironic and searchingly funny, It is Just That Your House is So Far Away delivers a Beijing love story and a vision of 1990s China on the edge of globalism.

Excerpt: It is Just That Your House is So Far Away (by (author) Steve Noyes)

The road beside the canal was absolutely black as he pedalled slowly, fatigued, towards Kick Fish county, when he felt Bian Fu's arm slip around his waist and her head rest between his shoulder blades.

This was his woman. They were on their way home.

Everyone was sleeping in the house when he dropped her off.

On the way out of Kick Fish he had to piss, but when he came out of the public outhouse at the end of the alley there were two bright lights hovering, which lowered, and a male voice said, "Shei ya?"

Well, who was he?

They were two policemen, an older, stout one, frowning, and a younger, slim one, smiling. "Who are you?" Stout repeated.

"I work at Jian Hua University. I am a Canadian."

"Do you have your passport?"

"What are you doing here so late at night?"

"I was accompanying my friend home from the bar."

They were clearly at a new level here. He hesitated, and they saw him hesitate. He didn't want Bian Fu involved in this; but he was out of his depth. With his limited Chinese he could hardly lie to them convincingly. And why should he lie to the police? Which was, come to think of it, a distinctly un-Chinese thought.

"You must get off your bicycle," said Stout.

As they walked back through Kick Fish, Slim was convivial. "You're not from Quebec, are you?"

"I knew some Canadians from Quebec once."

"They got to the door.

Bian Fu didn't blink on seeing the two cops. They started a conversation in Chinese, and he could make out New Year's Eve, near Beida, my friend, bicycle. It all sounded quite reasonable.

Then they were going inside the Wang household. Thank God her mother's not here, Jeff thought. The uncle sat up under his covers, his eyes wide. Chen Jie slunk out from the big bedroom.

"And who are you?" Slim asked Bian Fu.

"I live here, this is my mother's place."

Jeff felt cold all over. He was an ID card, a lousy hukou, away from going to jail. The policemen were obviously suspicious, perhaps thinking Bian Fu was a prostitute. They asked her where her mother was, why were they out so late?

Chen Jie cringed with her blankets wrapped tight round her.

She went back in the bedroom and returned with her student card. Slim barely looked at it.

"You -- we'll escort you out of the neighbourhood," said Stout. He waved his torch.

"Talk to you tomorrow," Jeff said.

"You know," said Stout, wheeling around and addressing them all, "a number of people have been killed in this neighbourhood lately. Everything we have done we have done for your safety."

"For our safety," they all repeated.

They took him to the high road and told him to be careful. And that his Chinese was very good.

Steve Noyes paints an affectionate portrait of China that is honest, intimate and layered. Through Jeff Mott, the reader moves beyond the tourist highlights into the schools, streets, parks and into the home of a particular family, experiencing the joys, frustrations and disappointments that come with exploring a country beyond its surface. But even more, this first novel shines a light on the complexities of love between a foreign man and a Chinese woman in China during the late 1990s and the vast cultural divide that separates them. It Is Just That Your House Is So Far Away is a journey into the labyrinth of the human heart where logic has no place. But if you are like Jeff Mott and stay there long enough, you just might learn something about yourself.