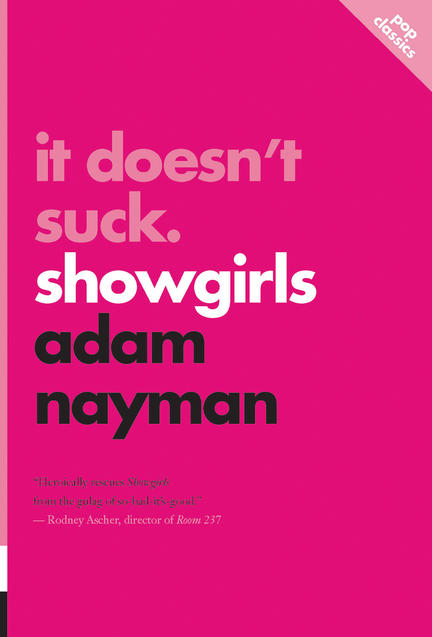 The Worst. Movie. Ever. is a masterpiece. Seriously. Enough time has passed since Showgirls flopped spectacularly that it’s time for a good hard look back at the sequined spectacle. A salvage operation on a very public, very expensive train wreck, It Doesn’t Suck argues that Showgirls is much smarter and deeper than it is given credit for. In an accessible and entertaining voice, the book encourages a shift in critical perspective on Paul Verhoeven’s Showgirls, analyzing the film, its reception, and rehabilitation. This in-depth study of a much-reviled movie is a must-read for lovers and haters of the 1995 Razzie winner for Worst Picture.

This expanded edition includes an exclusive interview between the author and Showgirls director Paul Verhoeven, as well as a new preface.

Adam Nayman is a film critic in Toronto for the Globe and Mail and The Grid and a contributing editor to Cinema Scope. He has written on film for the Village Voice, L.A. Weekly, Film Comment, Cineaste, Montage, POV, Reverse Shot, The Walrus, Saturday Night, Little White Lies, and The Dissolve. He teaches film studies at the University of Toronto and Ryerson University and is a programmer for the Toronto Jewish Film Society. He lives in Toronto, Ontario.

“It Doesn’t Suck isn’t just a book about Showgirls, but about the way we perceive such films and how that perception changes over time. As an extended conversation on one of the most ridiculed films of the past two decades, Nayman’s book is a valuable gift.” — Slate

“The book is, quite simply, stiletto-sharp, and succeeds in something extraordinary: It makes one want to revisit Showgirls not for laughs, or titillation, but for (gulp) understanding. That’s some accomplishment.” — The FilmStage.com

“Showgirls doesn’t suck. That’s the thesis of the short, entertaining new book It Doesn’t Suck, and author Adam Nayman goes a long way towards proving it . . . His book definitely demonstrates that Showgirls is a coherent statement, and that its excess, its ridiculousness, and its tastelessness aren’t arbitrary, but thematic.” — The Atlantic

“For lovers of Showgirls or controversial films in general, It Doesn’t Suck is likely to be a great conversation piece. It facilitates discussions and inevitable arguments about the film, offers good background and contextual information and equips the reader to carry on the argument with his or her own friends, accepting or rejecting as many of Nayman’s arguments as desired.” — Paste Magazine

“Nayman’s passion is entertaining, like sitting down with a friend who has just realized that you need to watch The Wizard of Oz while listening to Pink Floyd.” — Las Vegas Weekly

Other titles by Adam Nayman