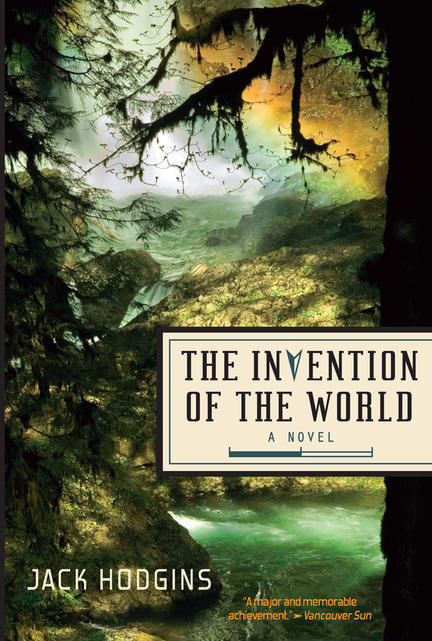 Jack Hodgins begins The Invention of the World with a ferry worker waving you aboard a ship that will take you not only to Vancouver Island but into a world of magic. The far west coast of Canada has always been regarded as a “land’s end” where the eccentrics of the world come to plot out the last best utopia. Hodgins both invents a world and shows how we continually invent that world in all its multiplicity.

Past and present intermingle while hilarious farce rubs up against epic tragedy. Intertwined are a love story, a portrait of a nineteenth-century village, a clash between wild loggers and weight-watching town folk who have to wear a pig when they fail to meet their weight goals. Pagan myths rub shoulders with the harsh pioneer days of the British Columbia rainforest.

As always with Hodgins, this novel is based on the portrayal of character. At the centre of the mystery is Donal Keneally, the mad Irish messiah who eighty years ago persuaded an entire Irish village to emigrate to Canada, there to become his slaves in the Revelations Colony of Truth. His heir is Maggie Kyle along with her collection of boarders in the old Colony of Truth building. Here truly is a novel that is itself an invention of the world.

The Invention of the World

This novel, originally published in 1977, bridges the past and present fictive worlds of a Vancouver Island colony. The Irish origins and Celtic backgrounds of many of its inhabitants offer an intriguing chronicle and critique of those who leave one form of servitude to an oppressive master in their homeland only to relinquish their hoped-for freedom to another oppressive master in their new land. The story, with all of its scandals and scuttlebutt, is told from the perspective of larger than life characters such as the recorder of the “history” of the Revelations Colony of Truth, Strabo Becker, and the colony’s oligarchic and tragic leadership in the person of Donal Keneally (the off-spring of a bull-god) and his several wives. The story culminates in the world of the 20th century’s last quarter.

Caution: Some coarse language. There are references to Haida slave raids.