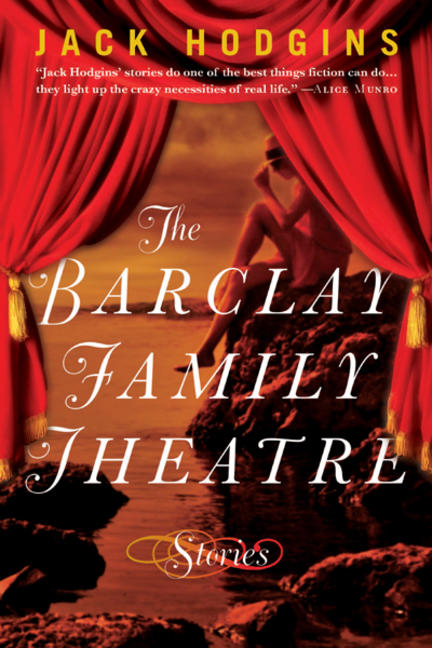 With The Barclay Family Theatre, his second collection of short stories, Jack Hodgins introduces us to a cast of characters who transform the everyday world of Vancouver Island into a wondrous world of human warmth and comic energy. There is Barclay Desmond, caught between the ambitions of his mother, who wants him to become a concert pianist, and his father who wants him to follow in his steps as a logger. There is Mr. Pernouski, a real estate agent and the fattest man to ride a B.C. ferry, who believes he can offer his clients their heart's desire. Hodgins also takes us abroad to Ireland and Japan to watch as his people attempt to reinvent themselves in new theatres of action. Through it all, Hodgins depicts his people struggling to centre themselves as their world rocks them into new and unforeseen directions.

“It’s unforgettable. . . . The Barclay Family Theatre leaves the reader with the magic and wholeness of extraordinary moments.” —Windsor Star

“In The Barclay Family Theatre we are reading the work of a major novelist at the height of his powers and fully in control of his material. . . . It’s virtuoso writing.” —Keith Maillard, Quill & Quire

“Together these characters form a world full of diversity, illustrating the various facets of the tragicomedy of human life. We remember them as we remember the pilgrims of Chaucer’s Canterbury Tales: as actors stepping forward and temporarily holding the whole stage to themselves.” —Jeanne Delbaere, Recherches anglaises et americaines

Jack Hodgins and his characters have put rural Vancouver Island on the literary map. Originally published in 1981, this collection of short stories revolves around seven eccentric sisters who act out their lives with flair and drama, infecting their family, neighbours and complete strangers with their larger than life ambitions. While laughing out loud, readers are also shown the depth of the human heart, with all its imperfections.

Winner of numerous awards, Jack Hodgins received the Order of Canada in 2010.