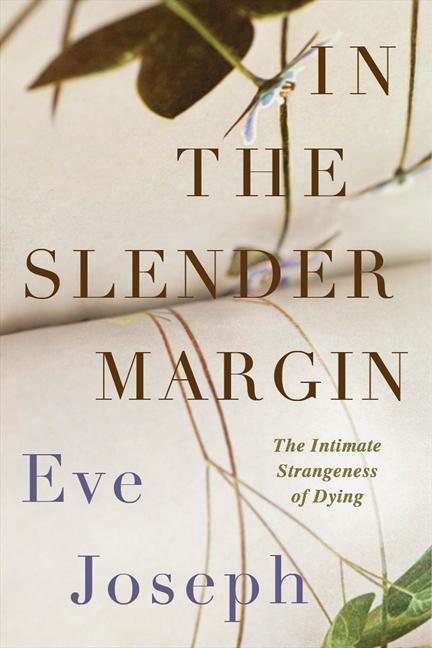 Part memoir, part meditation, this book is an exploration of death from an "insider's" point of view. Using the threads of her brother's early death and her twenty years of work in hospice care, Eve Joseph utilizes history, religion, philosophy, literature, personal anecdote, mythology, poetry and pop culture to discern the unknowable and illuminate her travels through the land of the dying. This is neither an academic text nor a self-help manual; rather, it is a foray into the land of death and dying as seen through the lens of art and the imagination.

Rather than relying solely on narrative, In the Slender Margin gains momentum from a build-up of thematic resonances. Joseph writes toward thinking about death and in the process finds the brother she lost as a young girl. She wrote the book as a way to understand what she had seen: the mysterious and the horrific.

Replete with literary allusions and references, from Joan Didion and Susan Sontag to D. H. Lawrence and Voltaire, this is an absolutely absorbing and inspired consideration of how we die and how we deal with it; a profoundly moving and helpful meditation on the mystery that awaits us all.

EVE JOSEPH’s first book of poetry, The Startled Heart (2004), was nominated for the Dorothy Livesay Poetry Prize. The Secret Signature of Things (2010) was also nominated for the Dorothy Livesay Poetry Prize, along with the City of Victoria Butler Book Prize and the Acorn-Plantos Award. She was awarded the 2010 P.K. Page Founder’s Award for Poetry. Her non-fiction has been shortlisted for the CBC Literary Awards, and her essay “Intimate Strangers” was nominated for a National Magazine Award and won both the Malahat Review’s Non-Fiction Award and the Western Magazine Awards “Gold” category for B.C. and Yukon Territories. Her work has been published in a number of Canadian and American journals and anthologies. Eve Joseph lives in Victoria, B.C.

Other titles by Eve Joseph

On Loss and Love: Books on Grief