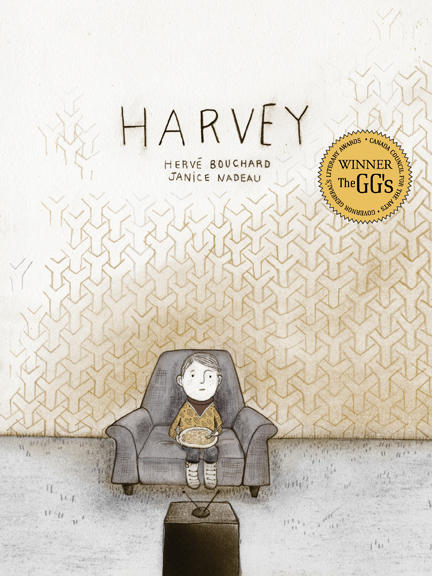 Harvey and his little brother are playing in the slushy streets of early spring when they learn, out of the blue, that their father has died of a heart attack. Everything changes and Harvey's favorite movie, The Incredible Shrinking Man, suddenly begins to dominate his fantasy life. When relatives try to get him to look at his father in his coffin, Harvey finds himself disappearing.

Brilliantly illustrated, emotionally true and devastatingly sad, this book is a very artful and yet utterly convincing look at the experience of extreme emotional trauma.

Janice Nadeau studied graphic design at the Université du Québec à Montréal and illustration at the École supérieure des arts décoratifs de Strasbourg (France) before working as an art director for various organizations. Over the years she has illustrated a number of books and is a three-time recipient of the Governor General’s Award for Illustration. Nadeau has an evocative, poetic and sophisticated style, which blends both retro and modern aesthetics. Her fine and intricate line work can be seen through her soft watercolours, whose multitude of details bring a rich touch to her compositions. Nadeau lives in Montréal, Québec, where she teaches illustration at the École de design of Université du Québec à Montréal. For more information, visit www.janicenadeau.com.

...a great graphic novel to give to a younger child trying to understand the pain of bereavement.

...a hilarious and poignant book...told and illustrated with great authenticity and originality.

...a convincing, artistic and beautiful look at the experience of emotional trauma...

Nadeau's charcoally, naïf-style artwork has the loose-figured feel of a child's drawings that belies its sophistication...Although adults may be more attuned to the complex portrayal of being bowled over by catastrophic loss, for children this open-ended book is deserving of discussion, difficult though it may be.

A sparse, evocative look at a father’s death...Harvey's child’s-eye perspective is flawlessly conveyed.

Harvey’s story, we learn early on, is about the time when he lost his father and became invisible. Then Harvey takes us back to the beginning — to the day when he and his friends are coming home from school, racing toothpicks down the gutter. However, when he and his brother get home, they are just in time to see their father being taken away in an ambulance and their mother weeping.

What follows is a touching child’s-eye-view of what happens to a sensitive boy when he is told his father has died. The illustrations are simply drawn and also deeply moving. The series of pages where Harvey’s mother is leaning on the priest while a crowd of people slowly disperse is heart-rending.

This book might be best described as a graphic novel. The words and illustrations combine wonderfully to create a poignant, slow-moving story that hits all the right notes. In places there are pages with only pictures and other places where there are full pages of hand drawn text. This is both a simply told story for children and a literary story making references that only adults are likely to understand. It is easy to understand why Harvey won the 2009 Governor General’s Literary Award (French) for both text and illustration.

As with many books that deal with the subject of death, this book may not be appropriate for all children; but for any child dealing with loss, this story places grief into an ordinary daily context and shows one way in which that grief might be expressed in the world.

What starts out as a relatively normal day for a young boy turns into one of confusion, disbelief and denial. This powerfully illustrated graphic novel tells of how one child deals with the loss of his father and the impact it has upon him. First published in French as Harvey, this title was the first to win the Governor General’s Literary Award in both children’s categories (text and illustration).

Other titles by Janice Nadeau

I Have the Right to Be a Child

Notes from a Children's Librarian: Graphic Novels for Summer

Each of these picks delivers its own take on the graphic form, and makes for easy reading during the summer months.