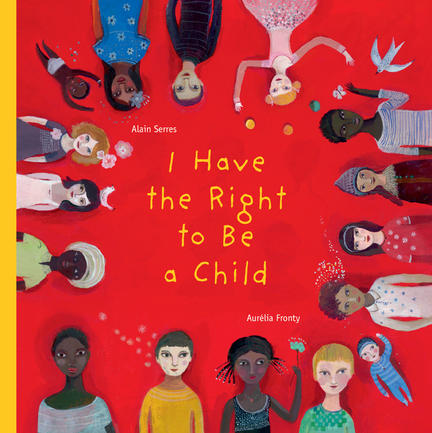 With a very simple text accompanied by rich, vibrant illustrations a young narrator describes what it means to be a child with rights -- from the right to food, water and shelter, to the right to go to school, to be free from violence, to breathe clean air, and more. The book emphasizes that these rights belong to every child on the planet, whether they are "black or white, small or big, rich or poor, born here or somewhere else." It also makes evident that knowing and talking about these rights are the first steps toward making sure that they are respected.

A brief afterword explains that the rights outlined in the book come from the Convention on the Rights of the Child, which was adopted by the UN General Assembly in 1989. The treaty sets out the basic human rights that belong to children all over the world, recognizing that children need special protection since they are more vulnerable than adults. It has been ratified by 193 states, with the exception of Somalia, the United States and the new country of South Sudan. Once a state has ratified the document, they are legally bound to comply with it and to report on their efforts to do so. As a result, some progress has been made, not only in awareness of children's rights, but also in their implementation. But there are still many countries, wealthy and poor, where children's basic needs are not being met.

With prompting and support, identify the main topic and retell key details of a text.

ALAIN SERRES was once a kindergarten teacher who was inspired by his young students to write children’s books. He has since published more than one hundred titles for children of all ages, many of which have been translated into other languages. Alain founded the highly regarded French publishing house Rue du Monde, whose mission is to provide children with books that allow them to question and imagine the world. He lives in Voisins-le-Bretonneux, France.

AURÉLIA FRONTY studied textile design at l'école Duperré in Paris before she began to illustrate children's books. Her colorful, naïve-style art is inspired by her Catalan roots as well as her travels in Africa and Asia. She has illustrated more than forty titles, which have been published around the world. She has also exhibited her art in France and in the United Kingdom. She lives in Paris, France.

... this book encourages teachers to use global picture books to explain how conditions are not the same throughout the world.

Provocative and guaranteed to spark awareness of children's rights

Other titles by Alain Serres

Other titles by Aurélia Fronty

You Hold Me Up

Notes from a Children's Librarian: Books on Citizenship

How do you inspire kids to be good citizens? How do you launch a student’s understanding of rights and responsibilities?