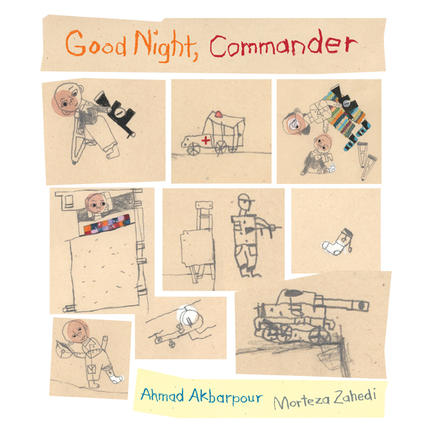 This extraordinary little book gives us a glimpse into the world of a young boy who has lost his mother and one of his legs in the Iran-Iraq war. We meet the boy in his room, where he recreates the conflict with an imaginary enemy and soldiers, trying to avenge his losses. The boy's father urges him to take off his artificial leg when he is at home, to join his uncles and aunties who have arrived for dinner. But when he does, he finds out that they are all about to go off to meet his new mother.

Back in his room he meets an enemy soldier who is also missing a limb. Identifying with this soldier, the boy offers him his artificial leg. And as he does, his mother smiles down on him from her picture on the wall, acknowledging his hurt and giving him comfort.

Ahmad Akbarpour is a novelist, short-story writer and author of children's books. He has won the Iranian National Book Award and was selected for the IBBY (International Board on Books for Young People) honor list in 2006. He is the author of the picture book Good Night, Commander, illustrated by Morteza Zahedi (Groundwood, 2010). He lives in Shiraz, Iran.

Morteza Zahedi has illustrated more than twenty books and has won many awards, including the Noma Concours Encouragement Prize in 2006 and an Honor Diploma award at the Bologna Illustrators` Exhibition in 2009. He lives in Tehren, Iran.

Shadi Eskandani is a poet and translator who was born in Iran and who lives now in Toronto.

A powerful messge in just 24 pages.

...an effective springboard for thought and discussion about war’s effects on the innocent.

In its excellent English translation, it can now help western readers understand the suffering of children who live in war zones or have disabilities... "Good Night, Commander" makes peace from even the worst of situations.

A young boy who lost his leg - and his mother - in the Iran-Iraq war confronts an imaginary enemy and has an uplifting revelation.

Other titles by Ahmad Akbarpour

Other titles by Morteza Zahedi

I Have the Right to Be a Child