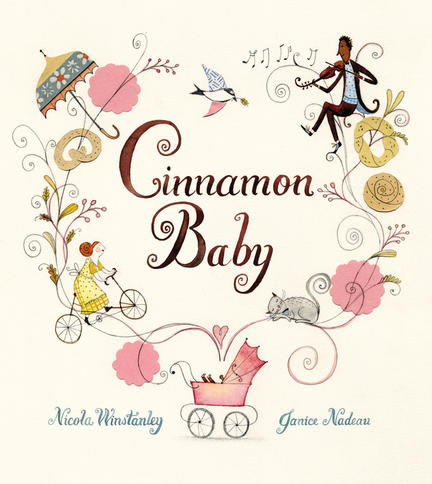 A contemporary fable about a magical remedy for a baby who won't stop crying.

Miriam is a baker whose bread is full of smells to make your nose twitch and tastes to make your tongue tingle. Miriam's own favorite cinnamon bread so delights Sebastian, a musician who enters her shop, that he buys it every day for a year and then asks her to marry him. After a baby is born to the happy couple, all is blissful until their bundle of joy begins crying. And crying. Only when the two are almost at wit's end does Miriam suddenly know, looking down at her baby curled up like a little raisin, exactly what she must do.

A celebration of the bond between mother and child and an ode to the power of our senses, each delectable word and image of this beautifully told and illustrated story will be savored.

Nicola Winstanley has always loved to write; but it wasn't until her daughter was born that she started writing stories for children. Nicola considers herself lucky because she gets to read children's books all the time — it's the best part of the day for her. She's also lucky because she gets to read fledgling writers, as she teaches writing to students at Humber College in Toronto.

Janice Nadeau studied graphic design at the Université du Québec à Montréal and illustration at the École supérieure des arts décoratifs de Strasbourg (France) before working as an art director for various organizations. Over the years she has illustrated a number of books and is a three-time recipient of the Governor General’s Award for Illustration. Nadeau has an evocative, poetic and sophisticated style, which blends both retro and modern aesthetics. Her fine and intricate line work can be seen through her soft watercolours, whose multitude of details bring a rich touch to her compositions. Nadeau lives in Montréal, Québec, where she teaches illustration at the École de design of Université du Québec à Montréal. For more information, visit www.janicenadeau.com.

Perfection might be the word to describe this confection, a delectable tale in which whimsical collage, watercolour and graphite pencil illustrations dance across the pages of text, in step with and amplifying the latter in all the best ways.

A charming offering infused with warmth, romantic whimsy, and love.

... turns the power of a mother's love into about as delicious a story as you could want when the subject is unhappy babies.

Children able to appreciate the quaint plot and drawings will enjoy this cozy story.

In this modern fable, Miriam is a baker who combines ingredients and song to create wonderfully delectable varieties of bread. Her aromatic cinnamon bread draws Sebastian into her bakery and a year later they are married. Their beautiful cinnamon baby with dusky skin is born and the family is happy until the child begins to cry inconsolably. After trying everything, Miriam returns to her bakery where she bakes cinnamon bread and, as the “cinnamony smell... fill[s] all the child’s senses,” the baby is soothed. The family returns to bliss.

This is Nicola Winstanley’s first picture book and she infuses it with rich sensory detail, marrying senses in her descriptions of Miriam’s “sweet-smelling voice” or “the taste of sugar in the air.” She fills the book with delicious language and “tastes to make your tongue tingle,” the alliterative effect, when read aloud, itself tingling on the tongue.

Janice Nadeau, three-time recipient of the Governor General’s Literary Award for illustration, uses soft watercolours, paper collage and line work to embrace Winstanley’s story perfectly: words and illustrations curl together as ribbons of song flow from Miriam and encircle the text on the page. Neither text nor illustrations are overly sentimental though. There is humour in details, such as the cat that plays the violin when Sebastian and Miriam meet and who hides under an umbrella while the baby’s tears rain down.

Cinnamon Baby is a beautiful read-aloud book for children ages three to seven — but also for anyone who has ever tried to soothe an inconsolable infant.

Miriam is a baker who makes wonderful breads when she meets Sebastian and they fall in love. Before long, the couple have a baby who seems perfect in every way until she starts crying from sun-up to sundown. The couple try to soothe the baby, but nothing works. Finally, Miriam has an idea and discovers that the scent she loves so much as a baker is the scent that soothes her baby.

Other titles by Nicola Winstanley

Other titles by Janice Nadeau