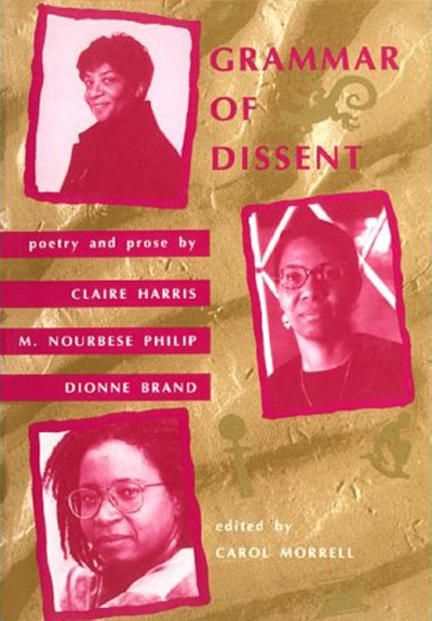 Grammar of Dissent gathers poetry, fiction, and essays of three of Canada's most powerful writers into one compelling volume.

Carol Morrell teaches post-colonial literature and women’s studies at the University of Saskatchewan. Grammar of Dissent has profited from the assistance of the three remarkable authors whose work she has so sensitively brought together.

Claire Harris is a Canadian poet of Trinidadian background who has produced eight collections of poems since her first volume, Fables from the Women's Quarters (1984), which won the Commonwealth Award for Poetry for the Americas Region. First released in 1992, Drawing Down a Daughter was nominated for the Governor General's Award for Poetry. Her work has been included in more than 70 anthologies and has been translated into German and Hindi. Claire Harris was born in Trinidad, West Indies, studied at University College, Dublin, where She earned a B.A. Honours in English. She came to Canada in 1966 and settled in Calgary. In 1975, during a study leave in Nigeria, she first wrote for publication and was encouraged by Nigerian poet, J.P. Clark. She also earned a Diploma in Communications from the University of Lagos, Nigeria (1975). After returning to Canada, Harris became active in the literary community in Calgary working as poetry editor at Dandelion from 1981-1989 and helping to found the all-Alberta magazine, blue buffalo, in 1983. She taught Grade Nine English in Calgary's Separate School system for 28 years, influencing generations of young people. Claire Harris is now retired and lives in Winnipeg.

M. NourbeSe Philip is the author of the play Coups and Calypsos, two novels, Looking for Livingstone: An Odyssey of Silence, and Harriet’s Daughter (Heinemann; The Women’s Press); three non-fiction works, Frontiers, Showing Grit, and A Genealogy of Resistance; and three books of poetry, including She Tries Her Tongue and Her Silence Softly Breaks, winner of the Casa de las Americas Prize. She is a Fellow in Poetry of the Guggenheim Foundation, and recipient of the Toronto Arts Award for Literature.

Other titles by Claire Harris

Drawing Down a Daughter

Fables from the Women's Quarters

Travelling to Find a Remedy

Other titles by M. NourbeSe Philip

An Odyssey of Silence

As Told To The Author By Setaey Adamu Boateng