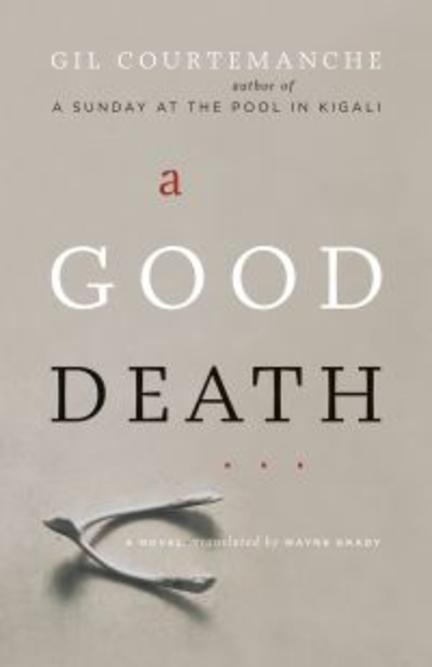 Following the worldwide success of A Sunday at the Pool in Kigali, Gil Courtemanche returns with a short, intimate, powerful second novel. A Good Death describes the everyday tragedy, horror, cowardice and love that lie at the heart of one family.

On Christmas Eve, a family has gathered for the obligatory dinner. The father, only yesterday an imposing figure who terrorized his children, has suddenly fallen prey to Parkinson's and finds himself trapped inside a disintegrating body. Andre, the eldest child, is approaching sixty. He has never loved his father, yet can't help but be moved as he witnesses his decline. How should we behave towards a parent to whom all pleasures are forbidden? Sould we struggle to prolong his life, or help him to end it? Around the dinner table, opinions are divided. Once more, Gil Courtemanche takes us on a deeply moving voyage into the essence of our humanity.

Gil Courtemanche was a journalist, essayist and novelist based in Montreal, Quebec. His best-selling first novel, A Sunday at the Pool in Kigali, was an international sensation; it has been translated into many languages, sold in over twenty countries and made into a film. In 2010, his novel A Good Death was made into a film, The Last Escape. On Friday, August 19, 2011, Courtemanche lost his two-year battle with cancer of the larynx. His work will live on as a testament to his commitment to outing injustices in the world.

"The beauty of A Good Death is in Courtemanche’s deft exploration of Andrea’s love for his father, even as he denies to himself that he feels this love. His quest for understanding, and the conflicting needs of parents and children, make for an intense emotional journey that is raw and honest."

"[A Good Death is] a striking account of a family and its efforts to cope with the binding prospect of death. ...[The] rather original approach challenges readers to look at their own lives and examine past events which, for better or worse, have shaped the individuals they have become."

"Canadian author Courtemanche beautifully captures the conflicted dynamic of a dutiful child who has never loved his father, desperately needs to please his loving mother, and can only survive by maintaining emotional distance from the whole messy swamp of lifelong familial grievances and entrenched behaviors...This follow-up to the brilliant Sunday at the Pool in Kigali (2003) beautifully compacts the big issues of aging, dying, and duty into scenes of resentful devotion, cheerful fatalism, and intimacy held at arm's length. Highly recommended."

"Gil Courtemanche turns his unsparing eye...to a smaller but nevertheless seething locus for a political and ethical dilemma -- the family...it raises powerful questions -- what is a good death, or life, anyway? And the ending is literally breathtaking."

Other titles by Gil Courtemanche

The World, the Lizard and Me

A Sunday at the Pool in Kigali