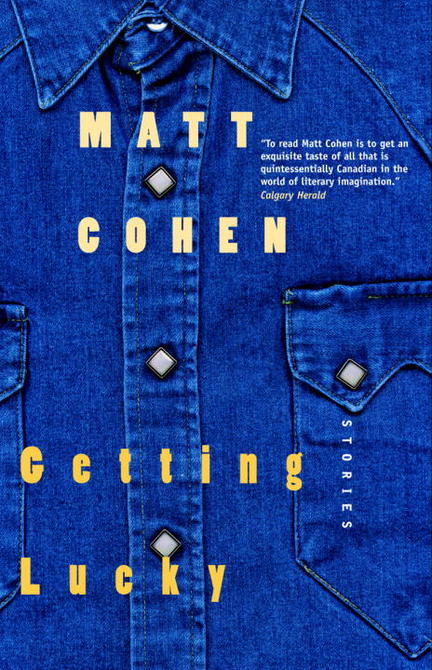 With a clear-eyed affection for the wandering souls who populate the ten stories in Getting Lucky - as they cling to talismans like a cowboy shirt, a chenille bedspread and a 1953 classic Ford - Matt Cohen causes us to look at them, and the worlds they inhabit, in unexpected ways. In his darkly comic, wholly original manner, he moves and surprises us, makes us laugh, and reveals the many sides of his extraordinary imagination.

“Michael,” the woman said. “That’s quite a name.” She leaned across the table and squinted at his face as though it were a book with small print. “Michael. Now there’s a name that says something to me.” She leaned back. “It says quiet, thoughtful, someone who’s got a lot more inside himself than he likes to show. Someone you could trust to hold your purse.” She smiled at Michael. Her eye teeth were just a little bit too long and it gave her a look that Michael thought might explain why she wasn’t here with a man. Then he was ashamed of himself for judging a woman by her teeth and reminded himself that he had chosen to sit opposite her because she had looked both attractive and available. “But not your credit cards,” she said and smiled again, this time tilting her head, and in this new light, her eye teeth didn’t look so bad.

“Do you have a lot more inside than you show?”

Michael looked down at his hands. He knew he was someone who kept to himself, but he couldn’t have offered a list of what he was keeping. There were, he supposed, all those feelings and thoughts for which he didn’t have words, and then there were the ones for which he did have words but also had the sense not to say.

Would this woman, for example, really want to know that he thought her eye teeth were a social handicap? That he was wondering if she was some kind of vampire? That the way her eyes sparked reminded him of his father’s dogs when they caught the scent of something they knew they could kill? That he wished he could untie his tongue, look into her face, tell her stories about herself that would put her in his power the way she had suddenly taken control of him, trapped and wrapped him in her charm so completely that he was just like a boy on a toboggan, speeding down an icy hill wanting to go faster and faster until he crashed.

Karen opened the door and motioned Michael to go in first. He moved towards the only light, which was a television set showing a hockey game, no sound. It was that playoff time of year. In front of the television set, sitting in a big stuffed chair, was a bald man with a long storky neck. As Michael came closer he saw the man was slowly swaying back and forth, eyes closed, as though either praying or in a trance. Maybe it was the reflection of the ice, but the man’s skin seemed absolutely white, almost transparent, in fact he was so absolutely hairless that even his eyelids were totally bald and ended in twin pink curves that matched his lips. He had a long curved blade of a nose that was like some kind of aerodynamic ornament.

“I’m Karen,” Karen had said after the bit about his name at the tavern. She was wearing a white short-sleeved shirt and slacks, no ring, and Michael had thought she might work at a hospital or a drugstore. She’d separated him off from the group without him resisting, then said he could drive her home.

“You can come in for a coffee and then we’ll see,” she said when they got to her place, a shabby Insulbrick bungalow in the north end of Kingston. But she hadn’t mentioned anything about this Bob.

Karen waved him down the hall and Michael followed her to the kitchen. She motioned him to sit down at the table. Half of it was piled with books like Know Your Aura and Secrets of Tibetan Meditation. Coffee cups, toast crumbs and two identical jars of strawberry jam provided the rest of the decoration.

“Kind of. We never got married but once it was like we were.”

Michael looked down at his hands. For luck he had worn a cowboy shirt to the tavern; his sister Sadie had given it to him last year for his thirty-third birthday, along with a card saying “Jesus Was a Cowboy,” and it had real pearl buttons. In the bright light of the kitchen it looked as stupid as he’d feared it would.

“That’s something,” Michael said. “That you could change from one to the other and still stay friends.”

Karen had slightly waved hair, so black it might have been dyed, strong puffed features. Not bad-looking, could be anywhere in her thirties. When she’d cleaned the table and put the kettle on she sat opposite him. There was something he’d been on the edge of noticing all evening, the way she looked at him: direct, like a man. He imagined himself calling his sister the next day to say he’d worn her shirt for luck and he’d ended up with a woman who looked like a man and a man who looked like a freak.

“About the man in the living room.”

“He had brain cancer. That’s what happened to his hair. Now he takes morphine pills. Says he has put human life behind him and is going to spend the rest of his time on earth bathing in his cosmic aura.”

“That’s something,” Michael said. Before they split up he and Lee-Anne had tried going to a group she’d found at the Cosmic Therapy Centre. One night the leader had told them to take off all their clothes and lie with their heads together, their feet sticking out like spokes of a wagon wheel. They all had to hold hands and pretend they were joined to the One Being. At first Michael had felt horny, even though everyone but Lee-Anne looked pretty ugly, and he’d wondered if they would be instructed to have group sex. Finally he managed to concentrate and what came into his head was a picture of an ice cream cone.

"When the dust has settled, long after we've joined him, readers in many countries will be finding their way into the funny, poignant, bittersweet pleasures of Matt Cohen's imagination." - Dennis Lee

"Matt Cohen had very particular genius as a writer: the talent and self-confidence to constantly reinvent himself in different styles and modes." - John Ralston Saul