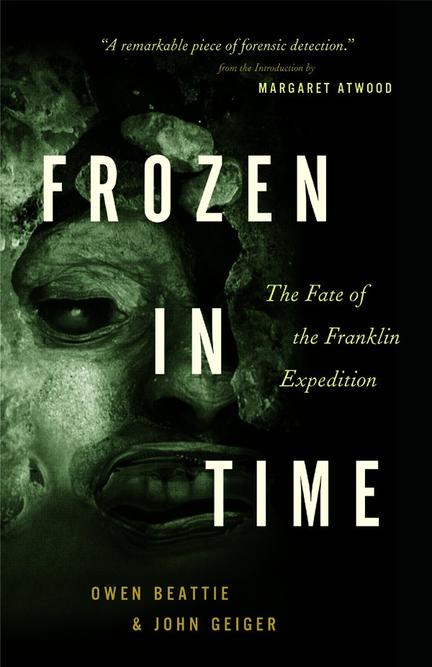 In its revised form, Frozen in Time updates the research outlined in the original edition and introduces independent confirmation of Dr. Beattie's lead hypothesis, along with new information about his discovery of physical evidence for both scurvy and cannibalism.

In addition, the book includes a new introduction written by Margaret Atwood, who has long been fascinated by the role of the Franklin Expedition in Canada's literary conscience and has made a pilgrimage to the site of the Franklin Expedition graves on Beechey Island. The unfolding of Dr. Beattie's unexpected findings is not only a significant document but also, in itself, a tale of high adventure.

Margaret Atwood was born in 1939 in Ottawa and grew up in northern Ontario, Quebec, and Toronto. Throughout her writing career, she has received numerous awards and honourary degrees. Atwood is the author of more than thirty-five volumes of poetry, children's literature, fiction, and non-fiction and is perhaps best known for her novels, which include The Edible Woman, The Handmaid's Tale, The Robber Bride, Alias Grace, and The Blind Assassin, which won the prestigious Booker Prize in 2000. Margaret Atwood currently lives in Toronto with writer Graeme Gibson, with whom she is the Joint Honourary President of the Rare Bird Society within BirdLife International.

JOHN GEIGER is a co-author of the international bestseller Frozen in Time: The Fate of the Franklin Expedition and the author of five other works of non-fiction, including The Angel Effect and The Third Man Factor: Surviving the Impossible. His work has been translated into fourteen languages. Geiger is chief executive officer of The Royal Canadian Geographical Society and a fellow of The Royal Geographical Society. He is also a senior fellow at Massey College in the University of Toronto.

ALANNA MITCHELL is an internationally award-winning science journalist and author whose latest bestseller is Sea Sick: The Global Ocean in Crisis. She has recently transformed the book into a one-woman play and is performing it across Canada. In 2014, the play was nominated for a Dora Award. She is a contributor to CBC Radio’s Quirks & Quarks and freelances for Canadian Geographic magazine and The New York Times. She has travelled to each continent and most parts of the ocean doing research and giving talks on marine science.

CANADIAN GEOGRAPHIC magazine is a publication of The Royal Canadian Geographical Society, which is one of the largest non-profit educational organizations in Canada, with more than 150,000 subscribers and a network of more than 13,500 educators. The RCGS was a partner in the 2014 Victoria Strait Expedition.

THE HONORABLE LEONA AGLUKKAQ is the member of Parliament for Nunavut. Following an extensive career in government, she became the first Inuk to be sworn into the Federal Cabinet in 2008, as the Minister of Health. She now serves as Minister of the Environment and is also the Minister of the Arctic Council for Canada. Ms. Aglukkaq was raised in Thom Bay, Taloyoak and Gjoa Haven.

Other titles by Owen Beattie

Other titles by John Geiger

Shackleton, Stefansson and the End of the Heroic Age

The Historic Discovery of HMS Erebus

The Secret To Survival In Extreme Environments