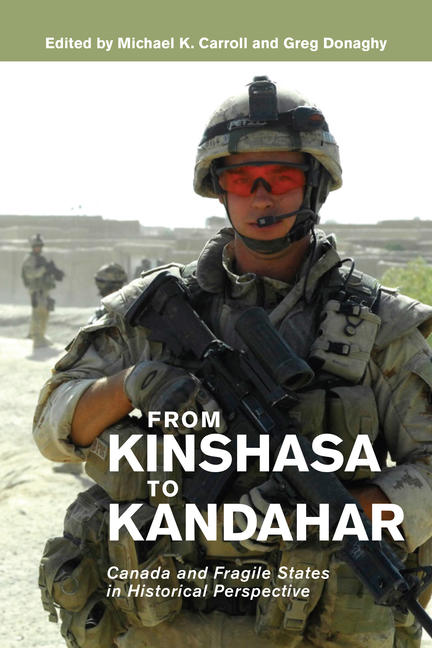 Failed or fragile states are those that are unable or unwilling to provide a socio-political framework for citizens and meet their basic needs. They are a source of terrorism and international crime, as well as incubators of infectious disease, environmental degradation, and unregulated mass migration. Canada's engagement with countries such as the Congo, East Timor, Bosnia, and Afghanistan underlines the commitment of successive Canadian governments to addressing the threats posed to Western security by state fragility.

From Kinshasa to Kandahar: Canada and Fragile States in Historical Perspective brings together leading Canadian historians and political scientists to explore Canada's historic relationship with fragile states. The collection spans the period from the 1960s to the present and covers a geographical range that stretches from the Middle East to Latin America to Southeast Asia. Authors embrace a variety of approaches and methodologies, including traditional archival historical research, postmodern textual analysis, oral history, and administrative studies to chronicle and explain Canada's engagement with fragile and failed states.

This collection reflects the growing public interest in the issue of failed states, which are of increasing concern to Canadian policymakers and are making headlines on the world stage. It helps explain the historic forces that have shaped Canadian policy towards failed and fragile states, and provides a platform for a national discussion about Canada's future role addressing state fragility.

Michael K. Carroll is an assistant professor of History at Grant MacEwan University. He is also the author of Pearson's Peacekeepers: Canada and the United Nations Emergency Force, 1956-1967.

Duane Bratt is professor and chair in the Department of Economics, Justice, and Policy Studies at Mount Royal University.

Hevina S. Dashwood is Assitant Professor in International Relations at the University of Windsor.

Tom Keating was Professor of Political Science at the University of Alberta until his retirement. His field of interest was international relations.

David Webster teaches international and Asian history topics with a focus on the 20th century at Bishop’s University. He is the author of Fire and the Full Moon: Canada and Indonesia in a Decolonizing World. Previously he was collection editor of East Timor: Testimony (Between the Lines, 2004). His research focuses on trans-Pacific interactions between Canada and Asia, and on the diplomacy of independence movements in Asia.

Other titles by Michael K. Carroll

Other titles by Duane Bratt

Canada, the Provinces, and the Global Nuclear Revival

The Politics of CANDU Exports

Other titles by Hevina S. Dashwood

The Political Economy of Transformation

Other titles by Jean Daudelin

What Room for Manoeuvre?

Madness in the Multitude

Other titles by Tom Keating

Other titles by Andrew Thompson

On the Side of the Angels

Canada and the United Nations Commission on Human Rights

Other titles by David Webster

Flowers in the Wall

Truth and Reconciliation in Timor-Leste, Indonesia, and Melanesia

Fire and the Full Moon

Canada and Indonesia in a Decolonizing World