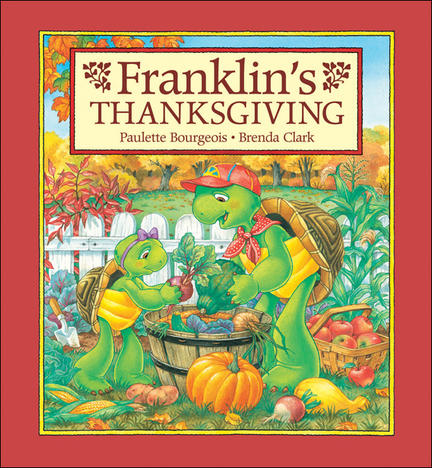 In this Franklin Classic Storybook, our young hero likes everything about Thanksgiving, from eating pumpkin-fly pie to making cornucopias. But what he likes best is having his Grandma and Grandpa share the holiday with him and his family. This year, however, his grandparents are traveling abroad. Thanksgiving just won't be the same without guests around the table, so Franklin decides to invite some friends for dinner. What a nice surprise it will be for his parents. Only Franklin's mother and father have the same idea, and on Thanksgiving Day all their friends show up for the festivities! With no more room in the house, where will the holiday meal take place?

Franklin’s Thanksgiving offers positive reinforcement of the real meaning of this holiday – sharing and being with family and friends.

Franklin’s Thanksgiving is worth adding to your list of titles in the Canadian series, as well as Thanksgiving themed collections.

Franklin’s Thanksgiving offers positive reinforcement of the real meaning of this holiday – sharing and being with family and friends.

Franklin’s Thanksgiving is worth adding to your list of titles in the Canadian series, as well as Thanksgiving themed collections.