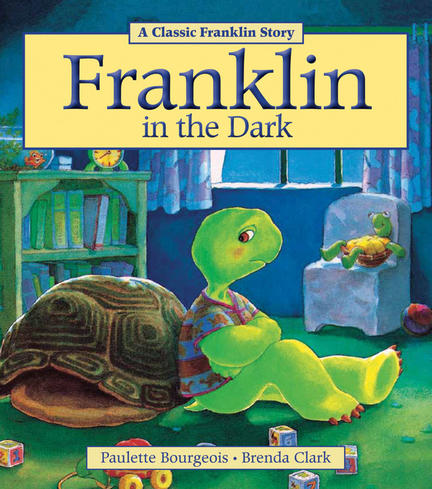 This larger-format special collectible edition of the first Franklin book celebrates the 25th anniversary of the world's most beloved turtle. Includes never-before-seen archival material and personal letters from the author and illustrator that offers a fun behind-the-scenes peek at this Canadian classic. A perfect gift for long-time fans and a new generation of readers alike.

In the Franklin Classic Storybook that started it all, poor little Franklin has one of the most common childhood afflictions --- he is afraid of the dark. This is particularly distressing for Franklin as he happens to be a turtle, and the darkness he fears is, of course, inside his own shell. Bravely, with shell in tow, he sets forth to seek help and in the course of his travels discovers a bird who is afraid of heights, a polar bear who is afraid of the cold, and even a hydrophobic duck. In the end, Franklin discovers that everybody is afraid of something, even his own mother, and his response to what he has learned is guaranteed to draw a smile.

In this classic Franklin storybook that started it all Franklin discovers that everyone is a little afraid of something. This larger-format special collectible edition includes never-before-seen archival material and personal letters from the author and illustrator. Celebrating the 25th anniversary of the world’s most beloved turtle, this book will make a perfect gift for Franklin fans. Originally published in 1985, by Kids Can Press (Our Choice 1986/1987).