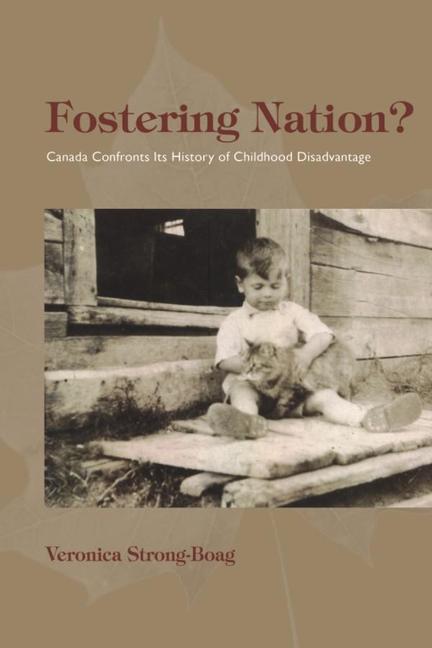 Fostering Nation? Canada Confronts Its History of Childhood Disadvantage explores the missteps and the promise of a century and more of child protection efforts by Canadians and their governments. It is the first volume to offer a comprehensive history of what life has meant for North America’s most disadvantaged Aboriginal and newcomer girls and boys.

Gender, class, race, and (dis)ability are always important factors that bear on youngsters’ access to resources. State fostering initiatives occur as part of a broad continuum of arrangements, from social assistance for original families to kin care and institutions. Birth and foster parents of disadvantaged youngsters are rarely in full control. Children most distant from the mainstream ideals of their day suffer, and that suffering is likely to continue into their own experience of parenthood. That trajectory is never inevitable, however. Both resilience and resistance have shaped Canadians’ engagement with foster children in a society dominated by capitalist, colonial, and patriarchal power.

Fostering Nation? breaks much new ground for those interested in social welfare, history, and the family. It offers the first comprehensive perspective on Canada’s provision for marginalized youngsters from the nineteenth to the twenty-first century. Its examination of kin care, institutions, state policies, birth parents, foster parents, and foster youngsters provides ample reminder that children’s welfare cannot be divorced from that of their parents and communities, and reinforces what it means when women bear disproportionate responsibility for caregiving.

Veronica Strong-Boag is a professor of women’s and gender studies and of educational studies at the University of British Columbia. She is a member of the Royal Society of Canada and a past president of the Canadian Historical Association. She has written widely on the history of Canadian women and children—including studies of the 1920s and 30s, the experience of post—WW II suburbia, Nellie L. McClung, E. Pauline Johnson, childhood disabilities, and modern neo-conservatism’s attack on women and children—and has won the John A. Macdonald Prize in Canadian History, the 2012 Canada Prize in the Social Sciences awarded by the Canadian Federation for the Humanities and Social Sciences and, with Carole Gerson, the Raymond Klibansky Prize in the Humanities. In 2012 Strong-Boag was awarded the Tyrrell Medal from the Royal Society of Canada for outstanding work in Canadian history. She is the author of Fostering Nation: Canada Confronts Its History of Childhood Disadvantage (WLU Press, 2010).

''With Fostering Nation? Veronica Strong-Boag, one of Canada's foremost historians, makes an important contribution to the growing historiography that attempts to decenter the ‘mainstream’ Canadian family.... Strong-Boag offers a broad, but groundbreaking, historical perspective on child protection policies and programs that illuminates the social forces shaping the management of Canada's foster children over time. In so doing, she carefully supports her argument that ‘policies and practices, for all their frequent good will, have rarely been equipped to address the root of much distress’ (p. 201).... Strong-Boag's work is a pioneering effort that brings much to the embryonic history of extrafamilial care of children, offering a nuanced discussion of the experiences of those involved in fostering, in all its forms. Fundamentally, Fostering Nation? reveals the profound and lasting impact of social inequalities, while nonetheless pointing to the hope inborn in current indigenous, disability rights, and feminist ‘condemnations of traditional policies and practices’ (p. 206).''

''Veronica Strong-Boag provides an important and much-needed analysis of the genesis and implementation of the fostering of children in private homes and institutions in English Canada.... Strong-Boag's history of fostering in English Canada adds a laudable new dimension to the history of childhood and family in Canada. It is an important companion study to her earlier work on adoption and a praise-worthy addition to the series Studies in Childhood and Family in Canada published by Wilfrid Laurier University Press.''

''Fostering Nation is an important and passionate book. Veronica Strong-Boag has cast an empathetic and illuminating spotlight on some of the most underprivileged and vulnerable children in Canadian society, focusing her unswerving gaze on harsh treatment and hard hearts, and yet at the same time showing us children who emerge from this darkness with hope intact. She alerts us to the uncomfortable fact that care giving in relatively wealthy capitalist society has limits, that care for children still falls disproportionately on women and that feminist responses to the inequalities that consign many children to the care system are needed to overturn decades of patriarchal structures at the heart of so much family disintegration. Canadian society, she argues, has all too frequently failed in its responses to vulnerable girls and boys. Fostering Nation gives space to all those implicated in the care of children—birth and foster families, social and care workers and the children themselves. This is not a happy story but a story it is important to hear for, in the case of children needing care, there are surely lessons to be learned from the past.''

''One of Canada's most talented historians offers an unflinching view of the children, parents, and communities caught up in the terrible tangle of state-sponsored care since the nineteenth century. As Veronica Strong-Boag narrates the story of what we still euphemistically call ‘child protection,’ she reveals the human anguish of fostering, a wide variety of institutional and family care arrangements that have carried the nation's impossible burdens of systematic poverty, disadvantage, and disability. Attentive to the shifting landscape of social policy, the particular dilemmas of Canada's first peoples, and the voices of young people themselves, this book locates moments of resilient humanity in a story overflowing with tragedies and failures. A must-read for anyone who cares about child welfare and social justice in the future as well as the past.''

Other titles by Veronica Strong-Boag

The Times and Life of Mary Ellen Spear Smith

The Life and Times of Laura Marshall Jamieson

Paddling Her Own Canoe

The Times and Texts of E. Pauline Johnson (Tekahionwake)

The Lives and Times of Ishbel Marjoribanks Gordon and John Campbell Gordon, the Aberdeens

English Canada Encounters Adoption from the 19th Century to the 1990s

edited by Veronica Strong-Boag & The Estate of Michelle Lynn Rosa