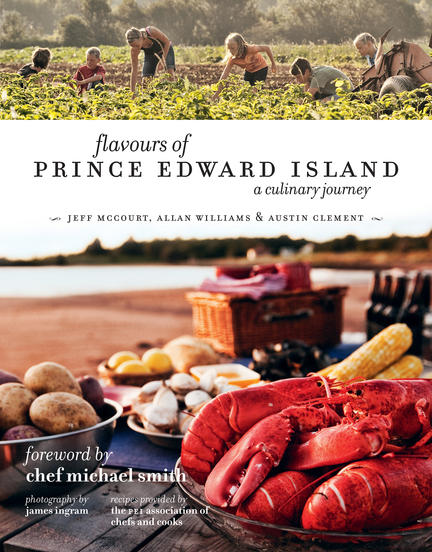 Prince Edward Island is a chef’s paradise. Its abundance of fresh, local ingredients is as inspirational as its magnificent red sands or its salt-sprayed red cliffs. Now, bring the taste of PEI home with you, with a stunning collection of recipes from PEI’s top chefs, enriched by photographs and stories from the island’s cooks, farmers and fishers and a foreword by Food Network star Michael Smith. Now in a fixed layout format available on the Kobo Vox, you can buy this ebook with all the original design and photography in tact. From heading down to the wharf early to get your pick of the best lobsters, to taking an afternoon to forage for the elusive chanterelle, tasting the mouthwatering dish that’s the end result is the last in a long line of adventures the island has to offer.

Island-born Jeff McCourt is the vice president of the PEI Association of Chefs and Cooks. Jeff served as sous chef to Chef Michael Smith for five years before becoming executive chef at The Mountain Lodge and Spa at Delphi in the west of Ireland. He is now chef at Red Shores Racetrack and Casino.

Allan Williams is president of the Association and a research chef at Canada’s Smartest Kitchen, a division of the Culinary Institute of Canada located in Charlottetown.

James Ingram (www.jivephotgraphic.com) is an award-winning photographer whose work has appeared in magazines such as Maclean's, Canadian Living, Style at Home and Weddingbells. He lives and shoots in Atlantic Canada.