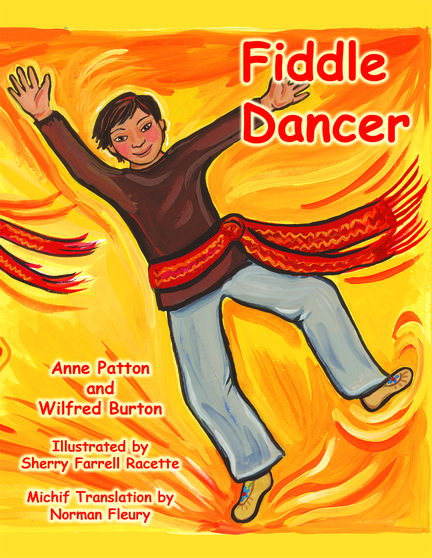 Fiddle Dancer tells the tale of a young Métis boy, Nolin, and his growing awareness of his Métis heritage and identity while his "Mooshoom" or grandfather, teaches hime to dance. Authors Wilfred Burton and Anne Patton masterfully weave a childhood story rich in Métis culture and language. This delightful story captures the importance of Elders as role models, a child's apprehension at learning new things, and the special bond between grandparents and children. Sherry Farrell Racette provides many beautiful illustrations for the book. In addition to the story, the book contains a translation into Michif-Cree by Michif specialist Norman Fleury, as well as a CD with narrations in English by author Wilfred Burton, and in Michif by translator Norman Fleury.

Wilfred Burton, a proud Michif, grew up in the Midnight Lake area of Saskatchewan. He was an elementary teacher, university instructor, and literacy coordinator before retiring. In retirement, he is extremely busy doing contract work for various educational publishers, and volunteering at Gabriel Dumont Métis Local 11, Li Toneur Niimiyitoohk Métis Dance, the Open Door Society, and various other organizations. Wilfred is the author of several Métis-specific children’s picture books, including the Fiddle Dancer series, which he co-authored with Anne Patton. He wrote Roogaroo Mickey, Road Allowance Kitten, The Big Tease, Road Allowance Kitten: Broken Promises, and a set of emergent readers called the Taanishi Books, co-authored with Angela Caron. He also co-authored Master of the Métis Fiddle with Cheryl Troupe; John Arcand: The Man, The Music, The Festival with Cheryl Troupe, and John and Vicki Arcand; as well as Let Me See Your Fancy Steps with Sylvie Roy and Jeanne Pelletier. His identity and love of Métis storytelling, fiddle music, and dance was a gift from his mother, Georgina Nolin. Currently you might find Wilfred beading, working in the garden, practising the fiddle, or playing with his two feline friends, Leo and Baptiste (Ba-chees).

Anne Patton’s books for children include Fiddle Dancer and Dancing in My Bones – books that explore Metis culture through the world of dance – and the Tyler collection for Scholastic Education.

Fiddle Dancer was nominated for a Saskatchewan Young Readers’ Choice Award, while Dancing in My Bones was the recipient of the 2010 Moonbeam Spirit Award. Full Steam to Canada, the first book in the Barr Colony series, was the winner of the Saskatchewan Writers' Guild John V Hicks Unpublished Long Manuscript Award. The second book, Through Flood and Fire, was a Moonbeam Children’s Book Award Silver Medalist.

Born in Ontario, Anne taught elementary school in Regina for many years, before retirement launched her into a career as a prolific children’s author. She now makes her home in Victoria, British Columbia.

Sherry Farrell Racette is an artist and educator. She has been painting, drawing and making things since she was little. Sherry received a Bachelor of Fine Arts and a Certificate in Secondary Education from the University of Maitoba and later, a Masters in Education from the University of Regina.A member of the Timiskaming Band of Algonquins in Quebec, Sherry was born in Manitoba and has been involved in Indian and Metis education for many years. She is currently an assistant professor with the Faculty of Education, University of Regina.Sherry wrote and illustrated The Flower Beadwork People for the Gabriel Dumont Institute and recently illustrated Maria Campbell’s Stories of the Road Allowance People (Theytus Press).

Métis customs and family values are integral to this story of love and traditions shared between a young boy and his grandfather. It incorporates Métis history, music, art and culture into a simple story about a child who thinks he will never be able to be as good a step dancer as his “Moushoom”. The Grandfather then explains to his “Nooshishim” that it takes time and practice to learn any skill, and that he will be as good a dancer as both his grandparents given time. The text for the Michif language translation is included with the English text on each page. The book comes with a CD that includes both the English and Michif narrations of the story, as well as recordings of three jigs performed by John Arcand.

Fiddle Dancer was shortlisted for the Children’s Book of the Year at the Anskohk Book Awards and the Saskatchewan Book Awards.

Other titles by Wilfred Burton

A Story of Eliza Delorme and her Cousin, Édouard Beaupré, the Willow Bunch Giant

Let Me See Your Fancy Steps

Story of a Métis Dance Caller

Master of the Métis Fiddle

John Arcand: The Man, The Music, The Festival

Other titles by Anne Patton

Crisis in the Barr Colony

Through Flood and Fire

Other titles by Sherry Farrell Racette

Wisahkecahk Flies To The Moon

Stories of the Road Allowance People

Other titles by Norman Fleury

Forefathers of the Métis Nation

A Story of Eliza Delorme and her Cousin, Édouard Beaupré, the Willow Bunch Giant

A Bison Culture Way of Life

A Story of Métis Life During the Voyageur Fur Trade Days

A Traditional Métis Story About Generosity