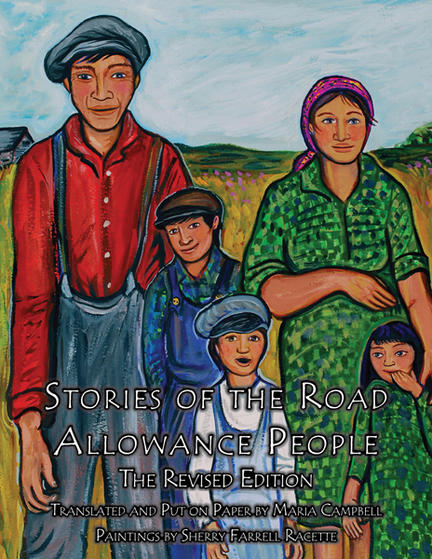 Maria Campbell’s highly-acclaimed Stories of the Road Allowance People is the quintessential collection of traditional Michif stories. Since it was first published in 1995, this treasured resource has given voice to Métis Elders and has informed both Métis and non-Métis about the traditional Michif worldview. The Gabriel Dumont Institute is honoured to offer this invaluable book in a new edition. With a new story and introduction by Maria Campbell, new artwork by Sherry Farrell Racette and a narration component in English and in Michif, Stories of the Road Allowance People provides readers with poignant retellings of Michif traditional stories handed down from lii vyeu—the Old People.

Maria Campbell (born 6 of 26 Apr 1940 near Athlone, Edmonton) is a Métis author, playwright, broadcaster, filmmaker, and Elder. Campbell is a fluent speaker of four languages: Cree, Michif, Saulteaux, and English. Park Valley is located 80 miles northwest of Prince Albert. Her first book was the memoir Halfbreed (1973), which continues to be taught in schools across Canada, and which continues to inspire generations of indigenous women and men. Four of her published works have been published in eight countries and translated into four other languages (German, Chinese, French, Italian).

Sherry Farrell Racette is an artist and educator. She has been painting, drawing and making things since she was little. Sherry received a Bachelor of Fine Arts and a Certificate in Secondary Education from the University of Maitoba and later, a Masters in Education from the University of Regina.A member of the Timiskaming Band of Algonquins in Quebec, Sherry was born in Manitoba and has been involved in Indian and Metis education for many years. She is currently an assistant professor with the Faculty of Education, University of Regina.Sherry wrote and illustrated The Flower Beadwork People for the Gabriel Dumont Institute and recently illustrated Maria Campbell’s Stories of the Road Allowance People (Theytus Press).

Stories of the Road Allowance People: The Revised Edition

This revised edition of the 1995 original includes two new stories and new illustrations. The lilting text of these Métis folk tales reflects the oral tradition from which they were collected. The provenance of the stories is presented. Maria Campbell, highly acclaimed Métis Elder, collected the tales with permission and presents them to enhance understanding of the Métis worldview. Complex and humorous, these accounts evoke more recent time and place than creation narratives, and challenge colonial preconceptions. Racette’s illustrations beautifully complement the text. A CD contains two of the stories read aloud and examples of traditional music.

Other titles by Maria Campbell

People of the Buffalo

How the Plains Indians Lived

The Book of Jessica

Other titles by Sherry Farrell Racette

Wisahkecahk Flies To The Moon