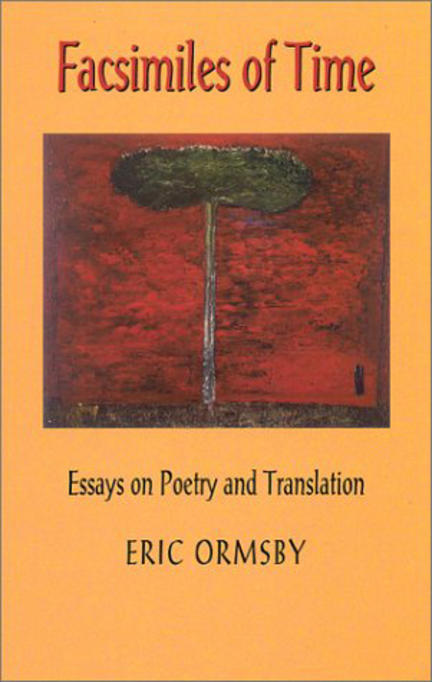 Eric Ormsby is a poet who writes prose that is both graceful and hard-headed. With an outspoken contempt for cant and literary persiflage, Ormsby ranges over a surprising array of writers and literatures. Each essay involves a new and sometimes startling viewpoint, whether on Hart Crane's homosexuality and its effect on his poems or the strange and twisted, yet redeeming, place which Shakespeare held in his own family history. From American and Canadian poetry to Classical Arabic literature Ormsby brings a fresh slant and incisive expression to his prose.

What was Franz Kafka doing at a ski resort in the last years of his life and what did he do there besides tobogganing? Everyone knows that Jorge Luis Borges was bookish, but did you know he was bloodthirsty as well? How is Pat Lowther's posthumous reputation as a poet connected with the brutal circumstances of her murder? These and other mysteries are explored in the 17 elegant essays that make up Eric Ormby's new book.

Eric Ormsby's poetry has appeared in most of the major journals in Canada, England and the U.S., including The New Yorker, Parnassus and The Oxford American. His first collection of poems, Bavarian Shrine and Other Poems (ECW Press, 1990), won the QSpell Award of 1991. In the following year he received an Ingram Merrill Foundation Award for `outstanding work as a poet`. His collection, Coastlines (ECW Press, 1992), was a finalist for the QSpell Award of that year. A sixth collection, Time's Covenant, appeared in 2006 with Biblioasis. His work has been anthologized in The Norton Anthology of Poetry as well as in The Norton Introduction to Literature.

Eric and his wife Irena currently live in London, England.

'Most of these essays are really book reviews, but they are hardly standard newspaper fare: they are long and intellectually robust pieces, most of which originally appeared in The New Criterion. Nevertheless, their primary purpose is evaluative, and as such they often reveal more about a particular edition or translator than they do about the writers who are their ostensible subjects. The finest piece in Facsimiles of Time, though, is more personal than scholarly: ''The Place of Shakespeare in a House of Pain,'' an unforgettable memoir of Ormsby's childhood in a dysfunctional Florida matriarchy, in which memorization of Shakespeare's works was considered a prime social duty. The Bard's language entered the daily speech of the family, and vitriolic arguments were peppered with cutting tags from the plays. This bizarre marriage of language and family goes a long way toward explaining the remarkable qualities of Ormsby's poetry, but it also makes for a fantastic conclusion to this fascinating and rigorously intelligent collection.'

'... Ormsby is one of the two or three best English-language poets we [Canada] can fairly lay claim to. A fact that should be recognized someday.'

'... his poems afford the rare pleasure of listening to a polished yet deeply humane sensibility respond, in language of exhilarating verve, to whatever it seizes on or despairs of.'

'Always, with Ormsby, things come down to the primacy of the word -- the sounds which shape and give ultimate authority. This is refreshing. It's sophisticated yet not done in a complex or over-technical way. It helps to eliminate the general and abstract at the same time as it shows the way such things can and do transform the ordinary into something greater, more permanent, able, through the shaping, to encompass and embody experience. It's admirable criticism and scholarship, certainly, but with the added dimensions of a poet's working knowledge, of fluent multilingual abilities, and a determined search for the almost sacramental autonomy of word and form. It's a heady brew.'

'From the heights of a sand dune in the desert to the achievements of Hart Crane and the minutae of a letter by Marianne Moore, Ormsby presents us with a world that is always fresh, and continually fascinating.'

Other titles by Eric Ormsby

On Life, Death, and Languages

An Arabic Critical Edition and English Translation of Epistles 29-31

The Baboons of Hada

Essays on Poetry and Place

Bavarian Shrine and Other Poems