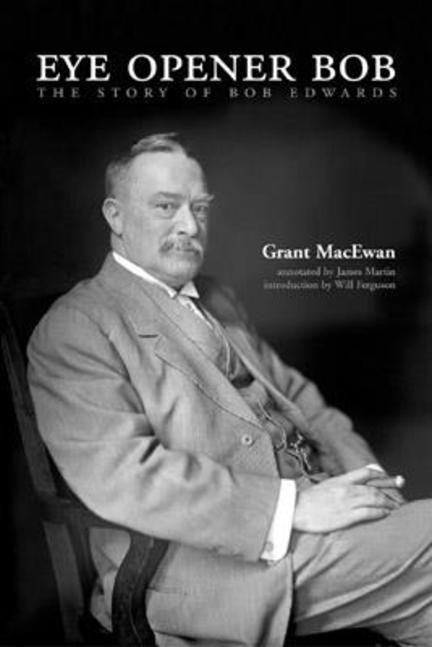 Forty-six years later those words still ring true: there has since been no book that has brought to life early Calgary the way that Eye Opener Bob does. Perhaps more importantly, it's the closest we'll ever get to Robert Chambers Edwards—Eye Opener Bob —the irrepressible editor of Calgary's most singular newspaper, and the city's most singular denizen.

Bob Edwards was a true Canadian original, the prototypical hard-drinking, pull-no-punches editor of the Calgary Eye Opener—at the time the largest paper between Vancouver and Toronto, with a circulation of over 30,000 copies. A paper with the power to elect or dethrone governments, to bring the mighty CPR to reform its ways, and to skewer the pretensions of society like few before or since. Eye Opener Bob brings this fascinating character to life in all his glorious self-contradictions.

MacEwan arrived in the city at just the right time to write Eye Opener Bob—the old Sandstone City hadn't yet been whitewashed over by the new money from the Leduc gusher, and there were still living people who had known Edwards. MacEwan ferreted out their stories as only he could do, combined the interviews with hard research, and the result is Grant MacEwan's best book by a country mile.

Eye Opener Bob can be enjoyed on its own or as a companion piece to the new compilation of Edwards's writing, Irresponsible Freaks, Highball Guzzlers, and Unabashed Grafters: A Bob Edwards Chrestomathy.

Grant MacEwan was a farmer, Professor at the University of Saskatchewan, Dean of Agriculture at the University of Manitoba, the 28th Mayor of Calgary and both a Member of the Legislative Assembly (MLA) and the ninth Lieutenant Governor of Alberta. The neighbourhoods of MacEwan in Calgary and Edmonton are named for him, as is the Grant MacEwan University in Edmonton and the MacEwan Student Centre at the University of Calgary. The majority of his books, of which there are many, were written after his retirement from politics and were intended to share Canadian history with Canadians. On May 6, 2000, MacEwan was honoured with the Golden Pen Lifetime Achievement Award for lifetime literary achievements by the Writers Guild of Alberta, which had previously only been awarded to W.O. Mitchell. He died a month later in Calgary, at the ripe old age of 97, and was given a state funeral, the first one in Alberta since 1963.

James Martin is a columnist for Calgary's FFWD Weekly and a freelance writer on the side. Until last year he was a true-blue Calgarian. He's since moved to Montreal where he is learning how to eat bagels.

The most authoritative history of adolescent Calgary that has ever been written, [and] a full-length portrait of this city’s most famous (and infamous) citizen. —The Calgary Albertan

Other titles by Grant MacEwan

Between the Red and the Rockies

Stories of Horses in History

A Century of Grant MacEwan

Other titles by James Martin

Calgary: Secrets of the City