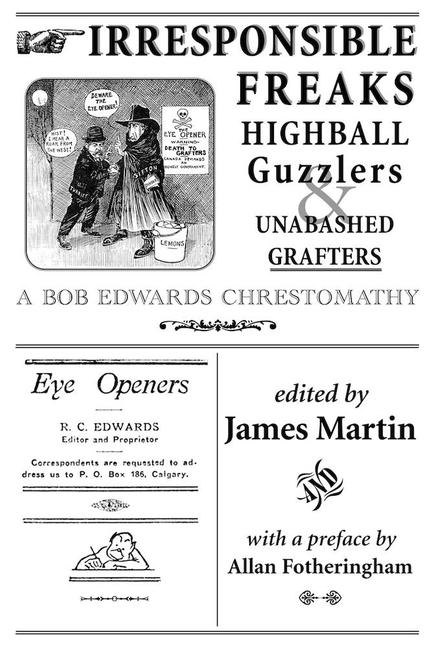 Bob Edwards, the Great White North's equivalent to H. L. Mencken, remains a singular figure in Canadian journalism. His newspapers, published in Wetaskiwin, Leduc, High River, Strathcona, Winnipeg, Port Arthur, and most famously Calgary, skewered politics, society, and business leaders with a fearlessness and outrageousness rarely seen then, now, or in between.

As editor James Martin points out in his illuminating introduction, Bob Edwards seems more modern the farther back in history he recedes; he was the granddaddy of Gonzo Journalism à la Hunter S. Thompson, a freewheeling cultural critic in the spirit of Lester Bangs, a pioneer of satirical reform as evidenced in Frank magazine, and a spoofer of the po-faced reporting of his day in precisely the same way that The Onion is now.

Irresponsible Freaks, Highball Guzzlers and Unabashed Grafters features mountains of Edwards's superb aphorisms, a generous helping of his longer and lesser-known works, and some choice items which have never before seen print, as well as miraculous archival discoveries and many cartoons from Edwards's celebrated Eye Opener. It is a welcome addition to the Bob Edwards canon for those who thought they knew everything about him, and an eye-opening introduction to the uninitiated: "He was writing this stuff a hundred years ago!"

James Martin is a columnist for Calgary's FFWD Weekly and a freelance writer on the side. Until last year he was a true-blue Calgarian. He's since moved to Montreal where he is learning how to eat bagels.

"An impressive compilation of quotations . . . by this master of the written word."

"Bob Edwards was the finest journalist Canada has ever know the pleasure of reading."

Other titles by Bob Edwards

Other titles by James Martin

The Story of Bob Edwards

Calgary: Secrets of the City