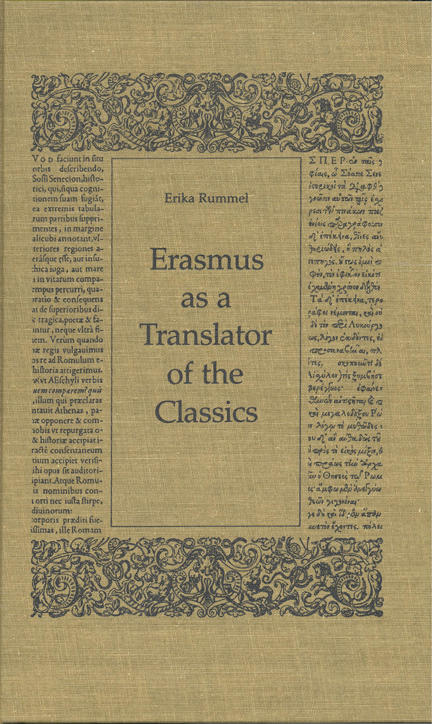 This first full-length study of Erasmus’ translations of classical literature examines his approach to translation and, more generally, his role as a transmitter of the classics. It traces in chronological order the progress of his Greek studies and the publication history of his translations from Greek into Latin; these included selections from the works of Libanius, Euripides, Plutarch, Lucian, Galen, Isocrates and Xenophon. It also illustrates Erasmus’ methods with appropriate examples from his own texts and from those of his predecessors and contemporaries. In so doing it provides an overview of the state of Greek literature in the Renaissance.

Erasmus shifted from literal translation to a more liberal approach – a change in attitude that was accompanied by a redefinition of his role as translator. In his early work he had pursued private goals, regarding his versions from secular authors as private pieces for his magnum opus, the New Testament. In later years his approach became more reader-oriented. He saw his work in terms of a service to scholarship – making Greek literature accessible to Latin readers and acting as their guide to classical thought. He was concerned not only with the mechanics of conveying the factual contents and literary qualities of the original, but also with the applicability of its moral content to Christian philosophy.

This book includes a chapter on Erasmus’ New Testament version; by allowing a fuller evaluation of Erasmus’ contribution to philology, this subject adds an important dimension to the book. Erasmus’ translations of Greek texts reflect two concerns that dominated his life. As an educator he wanted to see classical philology firmly established in the curriculum of schools; as a Christian humanist he wanted to convince biblical scholars that it was an indispensable tool of their profession.

Erika Rummel has taught at the University of Toronto and WLU, Waterloo. She has lived in big cities (Los Angeles, Vienna) and small villaes in Argentina, Romania, and Bulgaria. She has written extensively on social history, translated the correspondence of inventor Alfred Nobel, the humanist Erasmus, and the Reformer Wolfgang Capito. She is the author of a number of historical novels, most recently The Road to Gesualdo and The Inquisitor's Niece, which was judged best historical novel of the year by the Colorado Independent Publishers' Association. In 2018 the Renaissance Society of America honoured her with a lifetime achievement award. She divides her time between living in Toronto and Santa Monica, California. The Loneliness of the Time Traveller is her eighth novel.

'Rummel has done scholars a genuine service in her detailed linguistic analysis of the translations of Erasmus.'

Other titles by Erika Rummel

The Loneliness of the Time Traveller

The Painting on Auerperg's Wall

The Correspondence between Alfred Nobel and Sofie Hess

The Effects of Isolation on the Brain

Effects of Isolation on the Brain, The

The Correspondence of Wolfgang Capito

The Correspondence of Wolfgang Capito