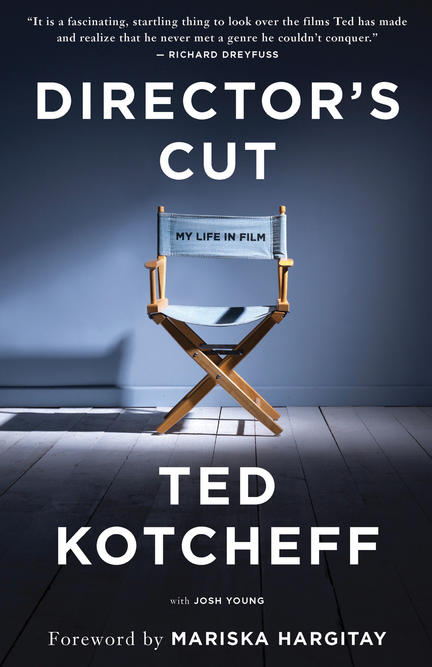 From Weekend at Bernie’s to First Blood and Law & Order: SVU, the legendary director recounts his journey and wide-ranging career in this intimate memoir . . . with a foreword by Emmy Award and Golden Globe Award-winning actress Mariska Hargitay

“It is a fascinating, startling thing to look over the films Ted has made and realize that he never met a genre he couldn’t conquer.” — Richard Dreyfuss, Academy Award-winning actor

“It is for such insights into the director’s craft that Ted Kotcheff’s digressive, sometimes salty Director’s Cut: My Life in Film is a book to be valued . . . a bounty of no-nonsense homiletics on the duty of the director and regular injections of salacious gossip.” — Film Comment

Born to immigrant parents and raised in the slums of Toronto during the Depression, Ted Kotcheff learned storytelling on the streets before taking a stagehand job at CBC Television. Kotcheff went on to direct some of the greatest films of the freewheeling 1970s, including The Apprenticeship of Duddy Kravitz, Wake in Fright, and North Dallas Forty.

After directing the 1980s blockbusters First Blood and Weekend at Bernie’s, Kotcheff helped produce the groundbreaking TV show Law & Order: Special Victims Unit. During his career, he was declared a communist by the U.S. government, banned from the Royal Albert Hall in London, and coped with assassination threats on one of his lead actors.

With his seminal films enjoying a critical renaissance, including praise from Martin Scorsese and Nick Cave, Kotcheff now turns the lens on himself. Director’s Cut is not just a memoir, but a close-up on life and craft, with stories of his long friendship with Mordecai Richler and working with stars like Sylvester Stallone, James Mason, Gregory Peck, Ingrid Bergman, Gene Hackman, Jane Fonda, and Richard Dreyfuss, as well as advice on how to survive the slings and arrows of Hollywood.

Josh Young's newspaper column,Dang Near Native,has garnered awards in the humor category from the National Newspaper Association two years running. When not roaming the state enjoying the offbeat, Josh may be found at home at his Long Creek Herb Farm, on the Arkansas border.

“It is a fascinating, startling thing to look over the films Ted has made and realize that he never met a genre he couldn’t conquer. He deserves to be considered as only a very few are: Spielberg and … the mind goes blank, because no one other than Steven has successfully ventured into such different terrain, created such a varied body of work, much like his idol Billy Wilder. Ted gave me a shot at the life I wanted; he handed me the greatest role I ever imagined, he set my life on a course that I had only dreamed of, I adored and adore him. I only regret we worked on only one film instead of ten.” — Richard Dreyfuss, Academy Award winning actor

“I love the book. Clear, concise, full of fun and deceptively brilliant: in among the show business anecdotes is buried a real procedural on the art of directing.” — George Segal, Academy Award nominated and Golden Globe winning actor

“Ted Kotcheff’s new book is at once a deeply felt tale of family and ethnicity and a thoughtful and sometimes hilarious memoir of show business war stories spanning Toronto, London, and Hollywood. It delivers on all levels.” — Peter Bart, former Variety editor-in-chief and author of Boffo: Hollywood in the Trenches

“With the pluck of a Dead End Kid​ and​ the insatiable curiosity of a ​​renaissance man, Ted Kotcheff takes us on his lifelong quest to find himself, love, and his art. A great read.” — Christopher Meloni, Emmy-nominated actor

“It was an easy and enjoyable read which I would definitely read again … I would recommend Director’s Cut to film enthusiasts and any want-to-be or up-and-coming directors or producers.” — Uncovered Books blog

Other titles by Josh Young