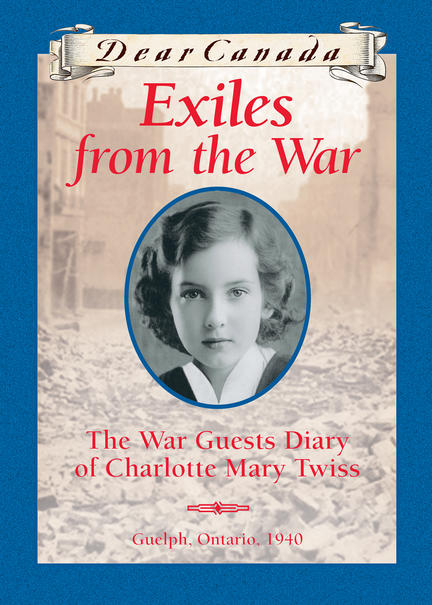 When a frightened girl and boy arrive on the Twiss family's doorstep to escape the Blitz, Charlotte wonders how she will keep her war guests from missing their parents back home, or from cowering every time a plane flies overhead. Though the war is being waged across the Atlantic, Charlotte begins to feel its danger, as her brother George defies their parents and enlists in the Navy.

After months of receiving letters from overseas, suddenly there is no word from him - has the unthinkable happened and George's ship been sunk by a German submarine?

Charlotte Twiss's diary shows her innermost feelings about her life on the Canadian homefront, as she helps her war guests "settle in" and wonders whether her brother is safe from harm.

Exiles from the War: The War Guest Diary of Charlotte Mary Twiss

Any work by famed author Jean Little is a treat, but Exiles from the War: The War Guest Diary of Charlotte Mary Twiss is a particular delight. Part of Scholastic Canada’s Dear Canada diary series, Exiles is Charlotte Mary Twiss’ 12-year-old view of life in 1940. Charlotte’s family in Guelph, Ontario, is very involved with a number of War Guests — children evacuated from Britain in an effort to protect them from German bombing. One little girl who lives with them becomes a ‘sister’ to Charlotte. The story gives readers the varied experience of the War Guests community — some homed successfully, some less so. Without confusing her audience for an instant, Little also richly expands readers’ knowledge of WWII by presenting other characters’ points of view: such as those of Charlotte’s Jewish friend, Barbara.

The author uses intimacy of the diary format to her advantage: including bouncy humour and the honesty, naivety and curiosity many girls have. This could be the reader’s diary, but for the wonderful collage of unfamiliar 1940s textures, sights, sounds and topics — radio broadcasts, buttoned underwear, Land Girls, lemon snow pudding, and Guy Fawkes’ bonfires. Little has done a tremendous job of balancing the diary format with a story shaped with excitement and uncertainty. Charlotte’s warm, secure family love symbolizes the core setting and theme — belonging and home. Will Terry, the unhappy War Guest, return to his family in London? Will the War Guests’ parents live through the Blitz? And, importantly, will Charlotte’s precious sailor brother return safely? Exiles goes high on my list of essential books on Canada’s participation in WWII for this age group.