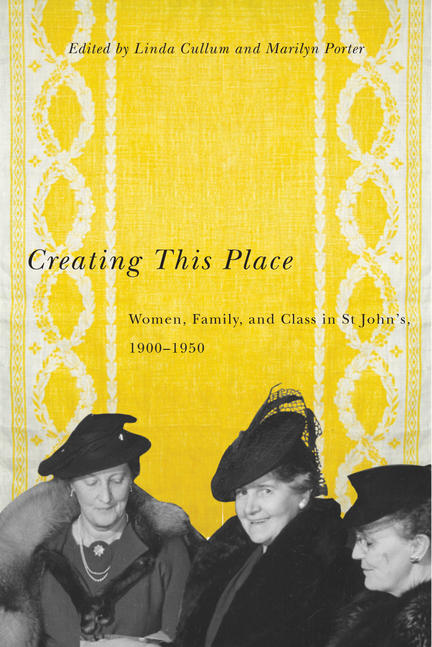 The twentieth century witnessed both the formation of Newfoundland as a self-conscious national entity and the construction of distinct and self-aware middle and upper classes in its capital city. This interdisciplinary collection examines the key roles played by women in the creation of this state and society, and the essential influence that gender, ethnicity, and religion played in class relations.

Shifting class relations were formed in the salient political events of the first half of the twentieth century in Newfoundland: the First World War, the suffrage movement, the Great Depression, the Second World War, and finally Newfoundland's contested entry into the Canadian Confederation. Creating This Place shows how upper-, middle-, and working-class worlds were established in the everyday work of women, as well as the ways in which the complex social boundaries of the period were constructed. Individual chapters explore issues such as women's work in religious and voluntary institutions, their struggle for voice, suffrage, and political change, work of domestic servants, and the construction of "proper" women and mothers through denominational education.

Creating This Place adopts an innovative perspective on Newfoundland and Labrador that focuses on the often overlooked lives of urban women.

Linda Cullum is a teacher, researcher and writer, currently employed in the Department of Sociology and the Women’s Studies Program at Memorial University of Newfoundland. She has written most recently on women and fish plant work in 1940s and is active in community work with equality-seeking groups.

Marilyn Porter is professor emerita of sociology at Memorial University.

Other titles by Linda Cullum

A Compendium of Women's Lives in Newfoundland and Labrador

Other titles by Marilyn Porter

A Compendium of Women's Lives in Newfoundland and Labrador

Their Lives and Times