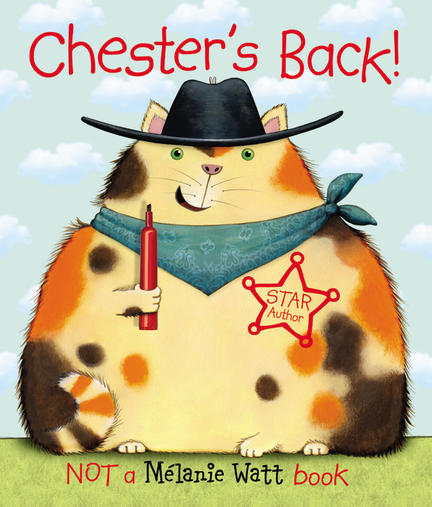 In this uproarious sequel to Chester, the battle of the picture-book makers continues. Which author-illustrator will come out on top --- Chester or Mélanie Watt --- is anybody's guess!

This time, there's no denying (in Chester's mind) that he's the star of the show. His already outsize ego has ballooned even more due to a spate of “fan mail” on the heels of his self-titled debut. As Chester sees it, who needs Melanie Watt when they have Chester? He's got no shortage of his own storytelling ideas. With heavy paw and red marker, this control-freak cat does not hesitate to commit them to paper. When Chester starts acting far too Hollywood, Melanie calls an open audition to replace the high-maintenance feline. This isn't a move that Chester will take lying down.

Get ready for a seesaw comedy of dueling author-illustrators. Who will come out on top is anybody's guess!

When Chester starts acting far too Hollywood, Mélanie calls an open audition to replace the high-maintenance feline. This isn’t a move that Chester will take lying down. Get ready for a see-saw comedy of duelling author-illustrators. This is the uproarious sequel to Chester.