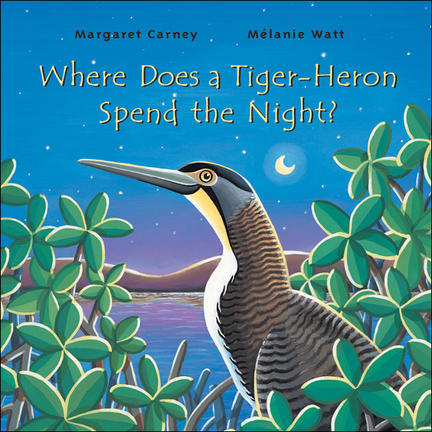 Children fold back the flaps and catch a glimpse of the elusive tiger-heron, or one of 11 other intriguing species highlighted in this poetic celebration of the beauty, wonder and variety of birds. Each bird is introduced through a simple couplet accompanied by lush illustrations. The artwork reflects the sights, sounds and smells of rain forest, tundra, ocean and desert habitats. Rich colors, lavish landscapes and unique avian characters make this a title both children and parents will want to explore again and again.

Margaret Carney shares her deep love of nature through weekly newspaper columns as well as her books for children, which include At Grandpa's Sugar Bush and The Biggest Fish in the Lake. She wrote Where Does a Tiger-Heron Spend the Night? with the hope of turning young children into birders before they can read. She lives in Whitby, Ontario.

Other titles by Margaret Carney

Biggest Fish in the Lake, The