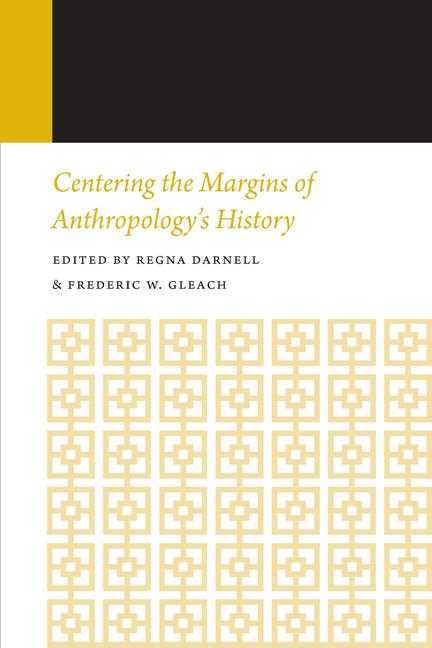 The series Histories of Anthropology Annual presents diverse perspectives on the discipline’s history within a global context, with a goal of increasing the awareness and use of historical approaches in teaching, learning, and conducting anthropology. The series includes critical, comparative, analytical, and narrative studies involving all aspects and subfields of anthropology.

Volume 14, Centering the Margins of Anthropology’s History, focuses on the conscious recognition of margins and suggests it is time to bring the margins to the center, both in terms of a changing theoretical openness and a supporting body of scholarship—if not to problematize the very dichotomy of center and margins itself.

The essays explore two major themes of anthropology’s margins. First, anthropologists and historians have long sought out marginalized and forgotten ancestors, arguing for their present-day relevance and offering explanations for the lack of attention to their contributions to theory, analysis, methods, and findings. Second, anthropologists and their historians have explored a range of genres to present their results in provocative and open-ended formats. This volume closes with an experimental essay that offers a dynamic, multifaceted perspective that captures one of the dominant (if sometimes marginalized) voices in history of anthropology. Steven O. Murray’s career developed at the institutional margins of several academic disciplines and activist discourses, but his distinctive voice has been, and will remain, at the center of our history.

"Scholars have argued that intellectual and knowledge borders and margins and their intersections are where paradigmatic and theoretical breakthroughs occur, but also that the margins are where those without disciplinary power are relegated to work upon being denied more central positions. Centering the Margins of Anthropology's History adds a new dimension to these considerations while challenging the existing dichotomy, arguing that intellectual margins must be viewed as the center of knowledge production. In 11 insightful chapters, contributors explore overlooked scholars who were marginalized due to their subdiscipline, attempts to make their work socially relevant, where they worked, their gender and heritage, the types of writing they pursued, and critical institutional events."—N. J. Parezo, Choice

“Vital for the discipline of anthropology and for those wanting to perform a history of science. This volume brings to light a plethora of authors, studies, and subjects that are often left on the periphery of the discipline so that we can discover and rediscover forgotten heroes. It is a wonderfully eclectic set of papers that group together in some truly fascinating ways.”—Robert P. Wishart, coeditor of Dogs in the North: Stories of Cooperation and Co-Domestication