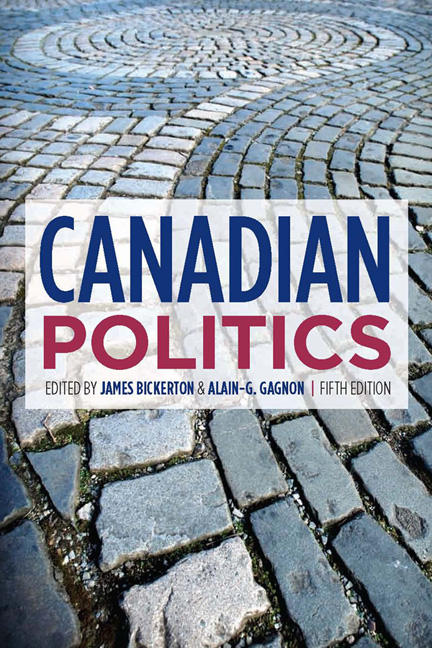 The new fifth edition of Canadian Politics continues the work of earlier editions in offering a comprehensive introduction to Canadian government and politics by a widely recognized and highly respected group of political scientists writing about subjects on which they are acknowledged experts. For this edition, the editors have organized the book into four sections: Part I: Citizenship, Identities, and Values; Part II: Institutions; Part III: Democracy and Representation; and Part IV: Canada in the World. The fourth section develops a focus on the diverse and increasingly important influences of globalization on the Canadian polity, the environment, and the role of Canada in the world.

Of the eighteen chapters, nine are completely new, and six new authors appear, including Martin Papillon on Aboriginal governments, Peter J. Stoett on Canadian international environmental policy, and Andrew F. Cooper on Afghanistan and Canadian foreign policy. The remaining chapters have been thoroughly revised and updated.

James Bickerton is Professor of Political Science at St. Francis Xavier University. His books include, as author, Nova Scotia, Ottawa and the Politics of Regional Development; as co-author, Ties That Bind: Parties and Voters in Canada and Freedom, Equality, Community: The Political Philosophy of Six Influential Canadians; and most recently, as co-editor, Governing: Essays in Honour of Donald J. Savoie.

Alain-G. Gagnon is a professor and the Canada Research Chair in Quebec and Canadian Studies in the Department of Political Science at the Université du Québec à Montréal. He is the author or editor of more than fifty books. His most recent works include the sixth edition of Canadian Politics (with James Bickerton), Federalism, Citizenship, and Quebec (with Raffaele Iacovino), and Contemporary Canadian Federalism: Foundations, Traditions, Institutions.

Other titles by James Bickerton

The Perils of Reinventing Government in Nova Scotia

Other titles by Alain G. Gagnon