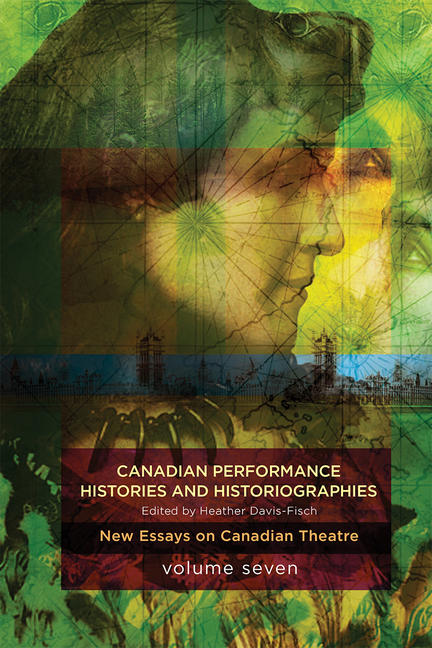 Challenging the idea of a singular narrative of Canadian theatre history and centring on questions of historiography and methodology, the essays in this collection investigate performances that have been excluded from mainstream theatre histories and re-evaluate well-known theatre movements to explore cultural memory. This collection asks, how do we remember performances of the past and why do some stories survive while others have been largely forgotten? Contributors draw on recent critical developments in performance studies, historiography, Indigenous studies, and hemispheric studies to explore topics ranging from the affective labour performed in life writing by World War I veterans, to a reconsideration of the role of dramaturgs in the alternative theatre movement, to a microhistory of petitions protesting minstrel performers appearing in Toronto, to a timely consideration of digital technologies in performance art documentation.

Heather Davis-Fisch is Associate Professor of English and Theatre at the University of the Fraser Valley in British Columbia. Her research interests include performance historiography and Indigenous and intercultural performance, particularly in historical paradigms. She is the author of Loss and Cultural Remains in Performance: The Ghosts of the Franklin Expedition (Palgrave, 2012) and editor of Canadian Performance Histories and Historiographies (Playwrights Canada Press, 2017). Her work has also appeared in the journals Theatre Research in Canada, Canadian Theatre Review, Performing Arts Resources, and Cultural Studies / Critical Methodologies, as well as in the books Theatres of Affect, Performance Studies in Canada, and Bloomsbury’s Cultural History of Theatre. She is the co-editor of Canadian Theatre Review’s Views and Reviews section.

Roberta Barker is Associate Professor of Theatre at Dalhousie University and the University of King’s College. She is the author of Early Modern Tragedy, Gender and Performance, 1984–2000: The Destined Livery. Her work on early modern and modern drama in performance has been published in Early Theatre, Modern Drama, Shakespeare Quarterly, and Shakespeare Survey, among other journals and essay collections, while her articles on contemporary Atlantic Canadian theatre have appeared in Canadian Theatre Review and Theatre in Atlantic Canada.

Other titles by Heather Davis-Fisch

Other titles by Roberta Barker