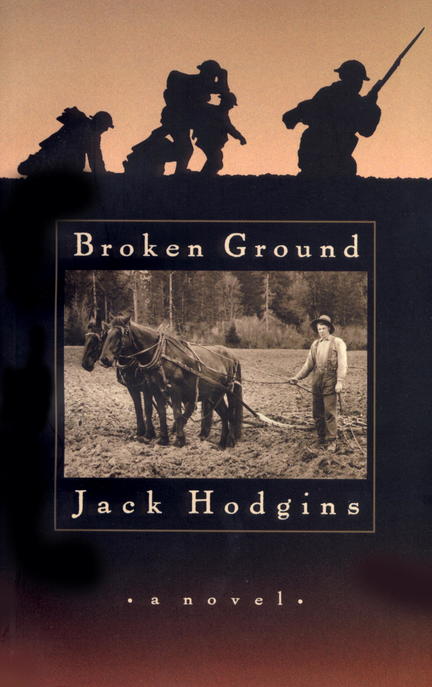 Broken Ground is a riveting exploration of the dark, brooding presence of the First World War in the lives of the inhabitants of a “soldier’s settlement” on Vancouver Island. From out of a stubborn, desolate landscape studded with tree stumps, the settlers of Portuguese Creek have built a new life for themselves. But when an encroaching forest fire threatens this fledgling settlement, it also intensifies the remembered horrors of war. The story of Portuguese Creek is told by several of its citizens, including a boy trying to recover from the sudden loss of his father, and a former teacher haunted by what happened to the soldiers he led in France. With a memorable cast of characters, and by turns heart-rending and tragic, humorous and humane, Broken Ground is a powerful novel that immerses us in the lives of an entire community.

#1 Book of Fiction for 1998 “Absolutely enthralling.”
–Quill & Quire Jury
“Jack Hodgins’ latest novel is destined to become an indispensable tool for comprehending this country.…At moments when his characters and his landscape are deeply intertwined – whether moments of horror or lyrical delight – the results are magical.”
–Toronto Star
“Broken Ground is rich and complex, gradually drawing the reader into its many threads while vividly portraying the Canadian soldiers’ experience in the First World War and their subsequent struggle to carve a life out of the wilderness while dealing with the past. This is a finely written fictional history that touches, informs, and makes you think.”
–Quill & Quire (starred review)

“Jack Hodgins is in serious danger of becoming a cultural icon, in the fine tradition of Margaret Laurence or Robertson Davies or Farley Mowat.”
–Edmonton Journal
“Spanning much of this most bloody and turbulent of centuries and balancing different points of view, both male and female, young and old, Hodgins tells a uniquely Canadian story which is not only powerful but ennobling. As such, Broken Ground is a profoundly moving affirmation of life and a resounding declaration of faith in a century that has severely tested humanity’s spiritual resolve.”
–Kitchener-Waterloo Record

“He is, after all, one of this country’s great virtuoso writers, and Broken Ground is one of his best.”
–Vancouver Sun
“Sparks immediate memories of W.O. Mitchell’s knack for capturing the pain of growing up. Here Hodgins matches Mitchell in sensitivity and perception.…A significant and good book.”
–Montreal Gazette
“Splendid.…A terrific story.…”
–Calgary Herald
“It may be Hodgins’ best novel yet, mingling moments of magic and lyricism with visitations from the Inferno ” the latter represented by scenes of trench warfare and a horrific fire that sweeps through the community. Hodgins’ evocation of the fire, in particular, is one of the few scenes in Canadian history that deserve to be called ‘epic.’”
–Toronto Star
“Hodgins builds up a sense of connectedness and shared experience, stories told and retold as the fibre of the community.”
–Globe and Mail
“Jack Hodgins always goes after the hard stuff: precision, honesty, wit, morality and a good, energetic story. Broken Ground might be his best book.”
–Ottawa Citizen
“It is a powerful novel, a complex and deeply moving novel.”
–Canadian Forum