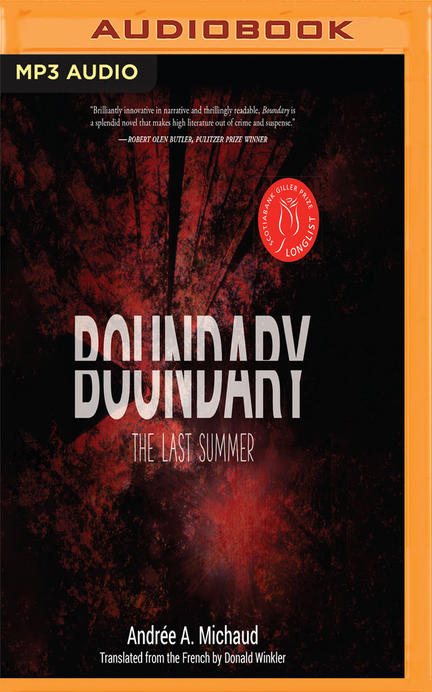 In the deep woods of the Maine borderlands, the legend of huntsman Pete Landry is still told around cottage campfires to scare children, a tragic story of love, lust, and madness.

During the early summer of 1967, inseparable teenage beauties Sissy Morgan and Zaza Mulligan wander among the vacation cottages in the community of Boundary, drinking and smoking and swearing, attracting the attention of boys and men. First one and then the other go missing, and both are eventually found dead in the forest. Have they been the victims of freak accidents? Or is someone hunting the young women of Boundary? And if there is a hunter, who might be next?

The Summer of Love quickly becomes the Summer of Fear, and detective Stan Michaud, already haunted by a case he could not solve, is determined to find out what exactly is happening in Boundary before someone else is found dead.

A story of deep psychological power and unbearable suspense, Andrée A. Michaud's award-winning Boundary is an utterly gripping read about a community divided by suspicion and driven together by primal terror.

ANDRÉE A. MICHAUD is one of the most beloved and celebrated writers in the French language. She is, among numerous accolades, a two-time winner of the Governor General’s Literary Award and has won the Arthur Ellis Award for Excellence in Canadian Crime Writing, the Prix Ringuet, and France’s Prix SNCF du Polar. Her novel Boundary was longlisted for the Scotiabank Giller Prize and has been published in seven territories, and the English translation of Back Roads was a finalist for Governor General’s Literary Award. She was born in Saint-Sébastien-de-Frontenac and continues to live in the province of Quebec.

Other titles by Andree A. Michaud

The River of Dead Trees

translated by Nathalie Stephens
by (author) Andree A. Michaud

Other titles by Aaron Abano